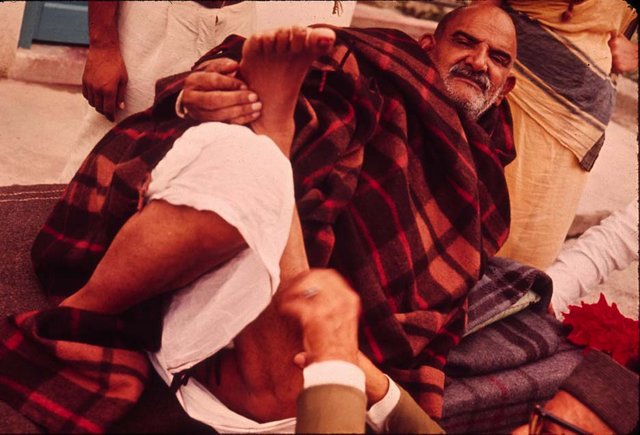 Shravan Nath Sang, Principal, Birla Vidyamandir, Nainital, said that he was born by the blessing of a saint.Yet he remained indifferent to those whom people regarded as saints or elevated souls.

One day in 1954 Kishan Chandra Tewari, a teacher at his school, was taking Baba home with him.

On the way Shravan Nath and Baba came face to face. Baba said, "Our principal has come."

Sang did not say anything and continued on his way to his house. Nevertheless, that momentary meeting inspired an ardent desire in Sang's heart to see Baba again. The feeling became more and more intense, and one day he went to Hanumangarh for darshan.

Baba saw him in private and talked to him for about twenty minutes.

After this Sang escorted Bhutani students to Bhutan, and their king, Jigmi Dorgi Chogyal, invited him for an audience. The king took him to see their guru, the Lama, who was about one hundred and fifty years old.

The Lama was so old that he could not even raise his eyelids. Raising his eyelids with his fingers, he saw Sang and asked, "Why have you come here?" Sang replied, "To have your darshan and blessings."

At this the Lama said, "You have a great saint with you. He can give everything."

He then described Baba Neeb Karori's form and appearance. Hearing the Lama's description, Sang's faith in Baba became firm. He looked up to Baba as an image of God and always went to have his darshan. Baba was particularly kind to him, and by Baba's grace, Birla Vidyamandir made good progress during his term as principal.

When Sang went to Indore to participate in a public school conference in 1962, he had an attack of paralysis. He then went to Motimahal, Lucknow, where Vidyamandir students studied in the winter. He was treated in the Medical College, and after many tests, the doctors diagnosed him with a brain tumor.

He was also losing his eyesight. Lying on his bed at Motimahal, he remembered Baba. He would say that wherever Baba turns his face, the universe also turns.In March 1963, when Tewari was with him, Baba and many other devotees came into Sang's room.

When he learned that Baba had come, he tried to get up because he wanted to touch Baba's feet. Baba forbade him to do so and warned him that he would go away if Sang did not stay where he was. Baba sat on a rectangular wooden seat placed by Sang's bed and stretched his foot out towards him.

In order to raise his spirits Baba said, "You are a Brahmin of the North Western Province. You are brave. Ask whatever you want, I am ready to give you all."

Rubbing Baba's toe with his hand, Sang listened to him while tears flowed from his eyes, washing Baba's feet. He said to Baba, "O God! You have given me everything. What is there left that I should ask of you?"

This moved Baba, and patting Sang's head with his hand, he said, "Sang is a true saint. He has no desire in him."

Baba became emotional, saying, "I will go to Vindhyachal and tell Ma." He got up and went out of the room, as did the other devotees. Tewari said that after Baba left, Sang became unconscious, and after remaining in a coma for fifteen days, he died.

When Sang died, Baba was in Allahabad. Two teardrops rolled down his cheeks, and he said, "Today Sang has become one with me."