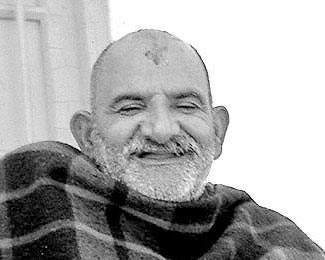 Because we're physical beings, and because we are identified with our physical bodies, we seem to think that a Guru, a real Guru, is also a physical body. But it's not that way.

And even though He has left that particular physical body, His presence is stronger than ever. And for me, He is that presence. You know. He's a living presence in my own heart and when I remember myself, I'm remembering Him. When I'm aware..., I'm aware of that presence that He is; that's what He is for me. It's almost as if He is the air. And the space that we live in.

And He never goes anywhere. We don't look. When ever we look, He's there. So, even when we're not looking, He's there. But we don't look. So, my whole spiritual practice is to keep aware and to keep seeing Him all the time. You know. As much as I can. And when the heart is charged up and turned on, you know, that's when you're aware of His presence. That's who He is for me now – become the whole universe.

If I saw him running down the street, I'd run right after him. I'd leave everything. In a split second.

Just because we are not seeing the physical body, doesn't mean there isn't one. He's completely in control of our experience and He is running the show completely.

When you surrender to a real master, it's only by grace that you surrender. It's not an act of your own personal will. Once surrender has happened, then everything in your life becomes your Guru, your Master, your Beloved. There's nowhere you go that He's not there. There is nothing you're thinking that he's not programming (in a way).

Just because He doesn't want us to see Him now, that's because that's just what's best for us. Because the real guru can only do what is best for you. No possibility.

But a real master Satguru doesn't have any personal desires left. There is no…, they become the universe. What is there for them to want? Or need?

So, a real master, a Bodhisattva, only can do what's in the best interests of everybody. If we're not seeing Him and the physical body now, that means that's what our best interests are now and we have to accept that completely as the way He wants it.

'Cause He could show up right now in this room, and sit on that chair right there. Who's to say He's not there? I just don't see Him.

For us, our job is to remember that love, to remember who He is, and to live in His presence as much as we can.

Krishna Das - in a radio interview with Radha Fournier, on Sound Cloud - 2012.