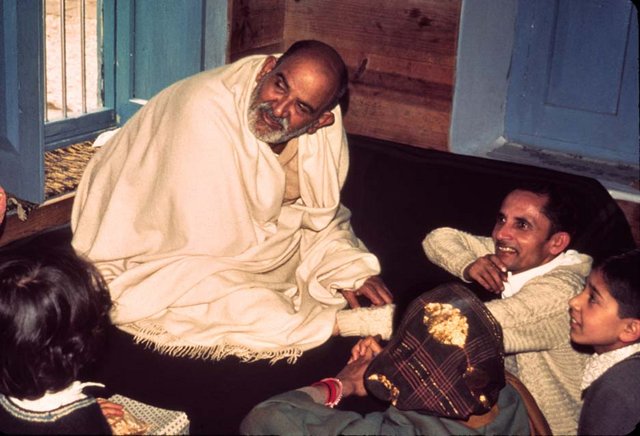 In 1944, G. C. Ganda was posted to the head office of the State Bank of India at Kanpur. The same year on 14th November, he met Baba at the home of his colleague, Dixit ji. He says, "Baba said to me, "I shall come to your house. " He then got up and left.

I could not understand what he meant at that moment, but my brief meeting with him had such an effect on me that I followed him in my car. Maharaj's car travelled fast and I could not keep up with it. After that, I had a great desire to meet him again."

"Later I found out that Baba had come to Lucknow. He was at Suraj Narain Mehotra's house. The next day I went there with my wife and her sister-in-law. Baba was sitting in a room on the first floor. Many devotees were there. We stayed outside the room. Baba sent all of the devotees away one by one and then called us inside. First Baba said to me, "Ask what you want." I asked for his blessings and ever since, he has always bestowed his Grace on me. To my sister-in-law he said, "You worry about your husband unnecessarily. Leave the worries aside and all will be well." Lastly he spoke to my wife, "You have come with something in your mind. Say whatyou want to ask." Baba asked her twice to speak but she kept quiet. Baba asked her once again and when she did not speak that time, he said, "Alright, I shall come to your house and see you. Tell me then. " The reason for my wife's silence was that she had made up her mind not to express her questions in words and wanted to hear Baba's answers in private. ""Baba had come to Dixit ji's house in Kanpur, from where I brought him to my home. We had made arrangements for his reception in the outer room of the house, but instead of going there, he said, "I shall sit in your small prayer room." He went into the house as if he was already familiar with it, and I simply followed him. He sat in the prayer room and asked me to send for my wife. Maharaj said to her, "What do you want to ask?" Still she did not say anything. Baba then spoke for about ten minutes answering all her questions in detail. In the end he said, "Tell me if anything has been left out." As was her nature she did not speak, but there was a look of joy and contentment on her face. Maharaj said, "Never trouble a saint in this way in future. " When Baba had left, she told me that Baba gave replies to all her questions. After this incident our whole family became his devotees ".Order: Divine Reality Shri Baba Neeb Karori Ji Maharaj