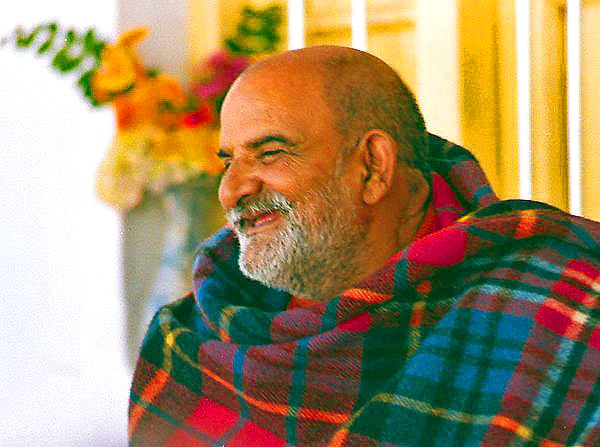 In January 1983 Sri Ma went with ten devotees to Neeb Karori, Baba's place of sadhana. While staying there Sri Ma had the desire to visit Baba's birthplace, the village of Akbarpur.

It was a sudden decision to go in such cold winter days. She and the devotees left for Hirangau by train on 17 January, and from there they went to the village.

Sri Ma was not known to anyone in Akbarpur, and since no prior information was sent, no one was there to receive her. There was no appropriate place to stay in the village, and in the prevailing circumstances, it was very difficult for them to make their own arrangements.

Nevertheless, Baba had said that all that is auspicious would be with Sri Ma, and in keeping with his words, his grace began to flow and provide for her. Shri Ram Sanehi came to know of Sri Ma's arrival and extended hospitality to her and the accompanying devotees. An old man who had come with Sri Ma happened to ask Ram Sanehi, "Do you ever see Baba in your dream?" Nodding in affirmation, Ram Sanehi said, "Sometimes."

"When did you see him last?"

He hesitated to reply, but when pressed he said, "Laxmi Narain [Baba's name in Akbarpur] said, 'Sri Ma is coming. Extend all hospitality. Don't let us down.'"

After tea Ram Sanehi took everyone to Dak Bangalia, the place where Baba used to live, since Sri Ma wanted to stay there.

The house had remained closed for the last fifteen years, and Shyam Sunder, a teacher of young offenders at Itawa Jail, kept the keys. Since he was on duty, Ram Sanehi was helpless, but Baba's lila came into play again.

Shyam Sunder said that since noon he had had a great desire to return home, although there was nothing that required his presence there. He became so restless that he left work and got on a mail train. The mail train did not usually stop at Hirangau, so he got a ticket for Tundla, a station ahead. Amazingly, the train made an unscheduled stop that day at Hirangau, and Shyam Sunder got off.

On reaching home, Shyam Sunder came to know that Sri Ma had arrived. He had Dak Bangalia opened for her, and a light bulb was somehow installed with a borrowed connection. It was late by the time the bangalia was cleaned, but gradually the atmosphere started getting festive.

Food was prepared, and when they were about to eat, many people arrived on the porch with musical instruments. Without any encouragement they began to sing devotional songs of Mira, Surdas, and Tulsidas and continued singing until 1:30 a.m. This was unusual because there was neither a temple in the village nor any devotional activity. The two local men had no idea who the singers were, and by the time it was morning, they were not to be found.

The next morning, having put all their luggage in bullock carts, the party of devotees went towards the Firozabad-Agra Road via Nagau.

Perhaps it was not acceptable to Baba that Sri Ma should leave without having prasad. On the way Ram Shankar Yadav, Roadways Inspector, was standing in front of his house in Nagau as if he had been waiting for them. He offered pranaam to Sri Ma and then took everyone inside. He offered prasad to Sri Ma and the devotees and provided fresh milk for everyone to drink. He then took the party to the main road, where a bus arrived within moments that had exactly twelve vacant seats for them—all in continuous rows. In this way Baba took care of Sri Ma on her first visit to his birthplace.