On March 11, 2012, a new maharajji.com launched with completely updated technology to provide easier, faster operation for both site viewers and curators. 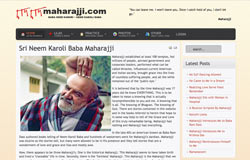 2011-2012 - Seva (service to Maharajji) is happening on maharajji.com. Maharajji has sent some sevaks to help in this seva. Thank you sssooo much, Maharajji.

Many stories of the Lilas of Maharajji have been added to maharajji.com from the older neemkarolibaba.com site. We have added some new material including information about new publications about Maharajji. We are also in the process of adding photographs to the stories of the Lilas of Maharajji, as well as recreating a completely new photo gallery featuring photographs of most beloved Maharajji.

At the beginning of 2012 work began on upgrading the core technology of maharajji.com to the latest open-source CMS (content management system) technology. During the upgrade the template was also changed.

This seva is ongoing and it continues.

If you wish to submit stories about your experience with Maharajji or photos of Maharajji, please use the email contact form. 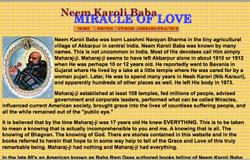 The very first data about Maharajji that was entered into this site was begun in 1997. That was on the old geocities.com site.

Much seva work, mostly in India, was done during 1998 and the first half of 1999. Mataji and Dharma Narayanji were consulted about the initial content for the upcoming Web site.

The neemkarolibaba.com Web site was launched in July 1999, in connection with the visit of Maharajji's pundit, Sri Gurudat Sharma, to America to stay at Maharajji's ashram in Taos, New Mexico USA.

In 2006, neemkarolibaba.com was converted from a 'static' Web site to 'dynamic' operation. This allowed for faster site operation and a better browsing experience.

In 2009, neemkarolibaba.com was subjected to frequent heavy attacks by hackers planting viruses designed to take down the site. In response to this, in 2010, the site was 1) moved to an extremely powerful and practically bullet-proof server, 2) upgraded to the latest version of Joomla, and moved to the maharajji.com URL.

In 2012, maharajji.com was upgraded to the very latest Joomla open-source technology.