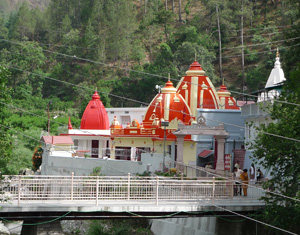 Kainchi is a beautiful secluded mountain ashram located in the Kumoan Hills in Uttarakand. The first temple was inaugurated in June 1964. It is approximately 38 km from Naini Tal. Many hundreds of people visit the temples here every day, in season.

Each year, during the famous June 15th bhandara, reportedly, more than one lakh (100,000) people are fed. Beautiful Gardens.

Rules are strictly enforced and individuals staying at the ashram are required to participate in morning and evening arati. The ashram is closed for a large portion of the year, because it becomes very cold.

Most people stay in Nainital or Bhowali or outside the ashram and visit the temples during the day.The closest Lodgings Accomodations are:1) Sudha Amar Retreat (mid-price range) Guest House Website sudhaamarretreat.com, Guest House Mobile: 08477802130, 09310448893, 08954555843 - Telephone Only for Guesthouse, Not Ashram2) Guru Kripa Guesthouse (economy)3) There are a number of Guest Houses in Bhowali just 8 kilometers away.

Staying Inside the Ashram

A letter of introduction and prior arrangement with the ashram are a must if you wish to stay in this impeccable ashram. If you are wishing to stay inside Maharaji-ji’s Kainchi Dham Ashram, you must first write to the manager and request permission for your stay. Generally people are allowed to stay for a maximum of three days. You need a reference note from one of the older devotees and you can send it along with your request to stay, and a picture of yourself to: This email address is being protected from spambots. You need JavaScript enabled to view it..

It was some time in 1962 when Maharajji called for Shri Poornanand of Kainchi village while he himself waited sitting on parapet wall by the road side near Kainchi. When he came, they refreshed the memories of their first meeting which they had 20 years back in 1942. They discussed about the place around. Maharajji wanted to see the place where Sadhu Premi Baba and Sombari Maharaj had lived and performed Yagyas. The forest was cleared and Maharajji asked for the construction of a Chabootara (rectangular platform) covering the Yagyashala. Maharajji contacted the then "conservator of forests" and took possession of the requisite land on lease.

The Hanuman temple is built over the platform mentioned above. His devotees started coming from different places and a chain of bhandaras, kirtans, bhajans started. The Pran-Pratishtha of idols of Hanumanji and others was performed on 15th June in different years. Thus, 15th June is celebrated every year as Pratishtha Divas when a large number of devotees come to Kainchi and get Prasad. The number of devotees and the associated vehicular traffic is so large that the district administration has to make special arrangement to regulate the same. Accordingly some changes have been made in the whole complex so that people do not face any difficulty in movement.

Kainchi temple is of a special importance in each and every devotee's life. It was here that Ram Dass and other westerners spent a lot of good time with Maharajji. All devotees should pay a visit to this temple at least once.

Construction of Maharajji's Temple at Kainchi

Babaji left His physical body in the night of 10 September 1973. The Kalash containing His ashes was already installed in Shri Kainchi dham.Then, without any plan and design the construction work of Baba's temple began in 1974. All His devotees cooperated (voluntarily).The artisans and masons engaged in the construction work has an early bath and wearing clean clothes began work, reciting Hanuman Chalissa and chanting "Maharajji Ki Jai" (glory to Maharajji). When the construction work was on, the devotees also recited Hanuman Chalissaand did Kirtan by singing (Shri Rama - Jai Rama - Jai Jai Rama), Mothers also writing "Ramnam" on the bricks passed them on to the workers. The whole atmosphere vibrated with the chanting of "Baba Neem Karoli Maharaj Ki Jai". Influenced by the ardent devotion of the Mothers for Babaji, the workers also developed the same feeling of devotion, faith, reverance and love. It was Babaji's lila that he infused these workers with the qualities of Vishwakarma (the architect of Gods) and they remained busy with the construction work.Now came 15th June 1976, the day for installation and consecration of Maharajji's murti. Maharajji Himself had fixed June 15th as the consecration of Kainchidham.The Bhagwat saptah and yajna etc. were completed before the installation and consecration ceremony. The devotees installed Kalash and hoisted flag on the temple with the sound of bells, gongs, drums and conches.The sky vibrated with the sound of clapping. Kirtan and slogans of glory to Babaji. The atmosphere was ecstatic and everyone had the feeling of Babaji Maharaj's physical presence. Then with recitation of hymns from Vedas and with the specified method of consecration ceremony and worship, Maharajji's murti was installed. In this way, Babaji Maharaj in the form of a murti is seated in Shri Kainchi Dham.