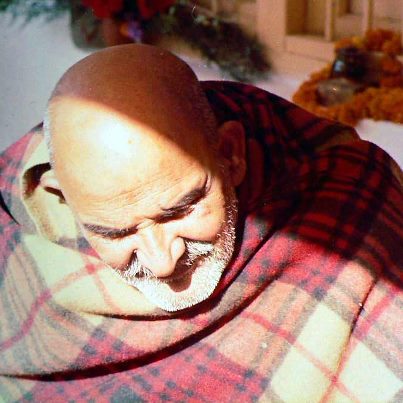 Around 9:00 p.m., I saw my wife, aunt, and mother going out. I asked them where they were going, and they said just to an adjacent house, that some baba was visiting. One of the fellows with me said cynically, "Does he eat? I can arrange food for him."(This fellow was a hunter)

My wife said, "You should not say things like that."

In ten minutes they returned. They reported that he had been sitting in a dirt hut with an oil lamp and had told them to go. When they didn't go, he said, "Go! Your husband's Bengali friends have come. Go and serve them tea. I shall come in the morning."

In the morning my wife and I went over together. Maharajji was on a small cot in a tiny room. As we entered he sprang up and took my hand, saying, "Let's go." We left so fast that my wife had to remove her sandals to keep up. He took us to our own house and said, "I shall stay with you." When the women from the other house came to take him back he would not go.

Later he questioned me: "You are a devotee of Shiva?"

"You already have a mantra." It was at that moment that I realized it had been Maharajji who had given me the mantra twenty years before.