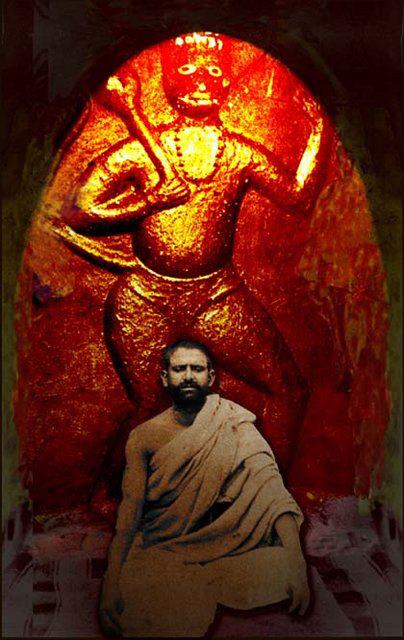 Once in Vrindavan dham, seeing a picture on a wall (in which Hanumanji was in a pose of doing Kirtan) Shri Ma said to Maharajji, " Maharaj you have installed Hanumanji everywhere in different poses - somewhere standing, or showing the images of Sita-Ram in his heart, or in a valiant pose, but have never installed him doing Kirtan".

Maharajji said, "Murti like this will be installed at Hanuman Chatti".

There is an ancient place called Hanuman Chatti on way to Badrinath between Pandukeshwar and Badrinath. There is an ancient Hanuman murti there. Hanumanji and Pandu's son Bhima had met at this place. It is said that when Bhima was going to fetch Sahasradal (a fragrant flower) from Gandhamadan hill, he saw an old monkey (Shri Hanumanji) lying in meditation and his tail obstructed the path. Bhima asked him to move his tail from the path. Then the monkey requested him saying,

"I have become old. Why don't you yourself move it to the other side?" Bhima tried but in vain. He exercised his full force but could not move it at all. Then, he had a feeling that that was not an ordinary monkey. When Bhima humbly insisted, Hanumanji disclosed his identity. Then, Bhima prostrated before him and asked him for his grace. Hanumanji said that he himself would sit on the ensign of Arjuna's chariot and protect him. Maharajji had told Shri Ma to install Hanumanji in chanting pose at this very place and after many years his words came to be true. By the inspiration of Shri Ma, such a murti of Hanumanji was installed at Hanuman Chatti on Tuesday, the 22 October 1991. Babaji had deposited certain amount for the construction of a dharamshala (hospice) long ago and it remained unused for years. According to Shri Ma's wish, the devotees, after Babaji had left his body, got built a dharamshala on a plot on Narayana range, at a distance of about 200 meters from Badrinath temple. Babaji Maharaj's murti has been inscribed in one of the rooms. When was the amount deposited in Badrinath and how Babaji's wish was fulfilled after so many years!