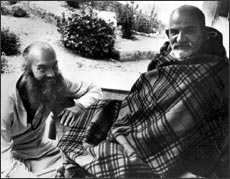 It was 5th of February 1971 and almost last days of winter season. Maharaj Ji used to stay in 4, Church Lane during winters and he would go to Sangam with some devotees quite frequently. On Feb.6, Dada, Ashoka, Siddhi Didi and Jayanti Didi had gone for darshan of lying Hanuman at Sangam area and were thinking to return back to this home. Suddenly we saw a large tourist bus coming from the opposite direction. We were on foot and Maharaj Ji with Dada were leading us. The Bus suddenly came to an halt there was some whispering in the bus which could be easily heard by the pilgrims on the road side. We saw a long row of tall and white people of both sexes getting down from the Bus. We heard "There he is." We could not found out who said this.

Prof. Richard Albert Ram Das (the names given by Maharaj Ji), Jagannath Das, Dwarka, Rameshwar Das, Balram Das and many others got down immediately and prostrated before Maharaj Ji.

I myself was thinking that it is going to be 5 P. M. here only and how shall I manage to reach before them and arrange for their tea and breakfast? Any way we got satisfied as there was no need to fear when Maharaj li was there.

Immediately after we returned we put on 2 big size Bhagona on the fire full of water for their tea. We got Bread, Butter, Namkin and large quantity of sweets from the market. They arrived exactly at 6 P. M. We were shocked to see their punctuality. Dada ran towards the gate for welcome and embraced Ram Das, Jaganath Das, Rameshwar Das, Hari Ram Das, Marium and Krishna Das etc. and brought them into our House after Hello hello. Our neighbours had never seen such a large number of foreigners. Males and female members including children of our lane were peeping through windows of their houses. Even pedestrians be came anxious and started looking at them. The sweet sound of 'Hare Ram Hare Krishna' kirtan started buzzing in the atmosphere. All of them were standing and singing charmingly in the kirtan Bhawan. I also used to leave my kitchen work and very frequently came to see and hear their kirtan.

Meanwhile Baba said "Dada give them tea" When these words fell on my ears I came in Kitchen swiftly. Mr. Mukund Joshi Accounts officer A.G.U.P. his wife and Smt. Rama and aunt of Shri Rajiv Pandey to whom I called my beloved Babhi soon joined me and started serving tea while and boys were supporting them in distribution of various types of sweets, Namkin, fruits. Prasad was served to all foreigners who were sitting on the floor in lines. Prof. Richard Albert was the main person present. Everybody took the prasad happily and in a jubilant moods. Jululation and excessive amount of happiness was apparent on every face of the visitor. When they were taking tea Baba said "Let them have meals also".

Meal was ready with in very short time. Everybody took meals as it was a Baba's wish. It was going to be 10 P.M. and Maharaj Ji wanted them to go. While going Ram Das dared to ask Baba

"Baba! when shall we come?"

On 6th of Feb. the Tourist Bus came in front of our door exactly at 6 A.M. I had already got the tea ready for them. Maharaj Ji was in his sleeping room. All these foreign devotees were anxious to see Maharaj Ji. Dada instructed them to "Please sing Ram Ram". The tea and breakfast was served to them. Maharaj ji came out after few moments and gave Darshan to all of them. By that time a bucket full of Jalebi was brought from the local market. Everybody was served plenty of Jalebi in leaf plates and then they were asked to go. Everyone of them was happy and did pranams to Baba and got into the their Tourist Bus and went.