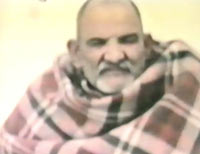 The old video of Maharajji has been digitally remastered by a devotee of Maharajji. Because of newer technologies used, the quality of this newly re-mastered video is definately an improvement. The video offers an amazing insight to most beloved Maharajji.

The video is made up of footage taken by the J. L. Barman family and Draupadi. These informal "home movies" show Maharajji Neem Karoli Baba in several locations.

In 1981, an American devotee in California, Mahavir, received the original movies from KC Tewari and made them into VHS tapes which he gave to the Taos Hanuman Temple for fundraising. Recently, Mahavir digitally remastered this video and added music from Krishna Das and Jai Uttal. It has now been posted on maharajji.com for all to appreciate.