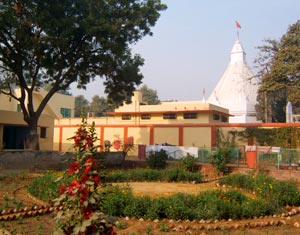 The wonderful Neeb Karori Baba Vrindavan Ashram is located in Krishna’s holy city of Vrindaban on the plains of Uttar Pradesh. The first temple was inaugurated in 1967. This ashram is on Parikrama Marg a short ways from Mathura Road. It was in Vrindaban that Maharaj-ji chose to leave His body in 1973.

Within this ashram is the Mahasamadhi Mandir of Neem Karoli Baba / Neeb Karori Baba. This is the site of Maharaj-ji's Mahasamadhi Bhandara in September. This ashram has experienced a lot of growth, including addition of a Ram-Sita-Laxshman-Hanuman Mandir, new ashram rooms, new paint, an excellent new kitchen, and large meeting hall.

Samadhi Temple at Vrindavan DhamBabaji Maharaj has already fixed the date of His leaving this mortal body. He had to choose a place for the cremation of His body and to prepare back-ground for His devotees to build a commemorative temple. Babaji had already got a yajna performed for nine days in the premises of the temple by His devotee Vishambhar from Aligarh on the occasion of Chaitra Navratra in March-April, 1973.