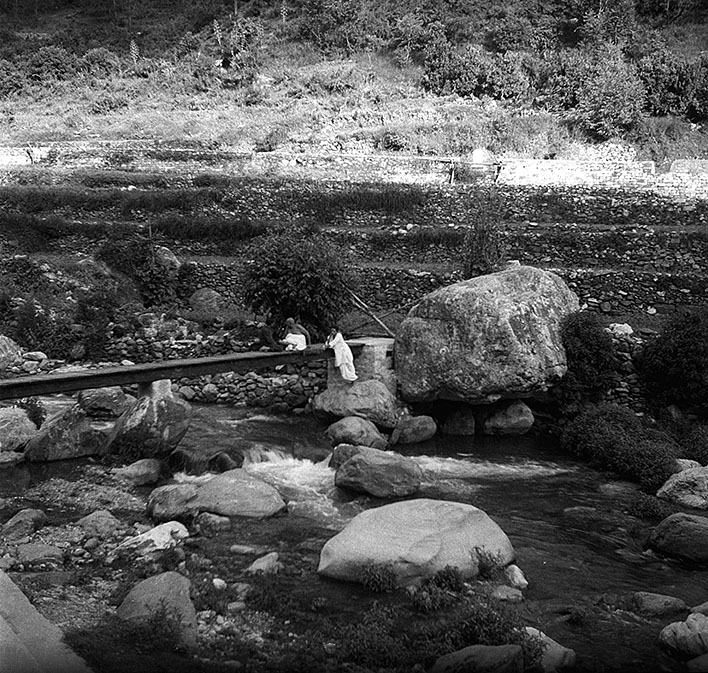 In Baba's ashrams the storerooms would be full of all the essential things.

What was needed, where it was to come from, how the payments were to be made-that was all his responsibility. How he did this was a great mystery. Huge amounts of provisions would be used every day but he would always know the exact inventory, although no records were maintained.

The provisions for the kitchen were purchased on credit from shops at Haldwani and other places. Haridas used to be in charge of ordering supplies and making payments.

One day Babaji reminded Haridas that a payment had not been made to a shopkeeper in Haldwani for a long time and shouldn't be delayed any longer. Haridas was certain the shopkeeper was owed 11,000 rupees. Babaji said the amount was less.

The next morning Haridas was given the 11,000 rupees and when he left Babaji told me he would only have to pay 7,000 rupees, which was in fact what happened. Some of the visitors who came to Kainchi wondered where Babaji got his money. They saw bhandara going on all the time and money being spent lavishly. One day, a certain person asked to meet me alone. He had seen me distributing prasad and being close with Babaji and wanted to know where the money came from. He wanted me to testify that Babaji was creating money. Such cases were not rare. They made us realize that all kinds of people came to Babaji with different aims and motives. In this way we could understand when he said, "So many come not for meeting me, but to test me"Money came from many quarters, but Baba was very selective. He would often say that money came to Hanumanji-it belonged to him. If you used it properly and avoided all misuse and wastage, there would always be enough. We would see him accept money from a devotee who loved to give with no other motive. If there were strings attached, he would reject it outright.Back in 1966 there was a small wooden bridge over the river in Kainchi, not the big bridge that is there now. He would sometimes go and sit there in the afternoon and take his food. A few days before the June fifteenth bhandara he was sitting there when a devotee from Barielly came in a truck. He had brought some supplies for the bhandara-a basket of clay cups and two or three packets of leaf plates. He came and sat before Baba and said to me, "Dada, tell me what else is needed?""Nothing"He went on pestering me, "What else? What else?"Then I said, "All right, if you want to send something, then sendanother two baskets of those clay cups " Those cups are not easily available in the hills.Maharajji cried, "What? What are you going to do with them? You have got so many. You are very greedy. Whenever somebody offers you something, you jump for it" I kept quiet.When the man had taken prasad and was about to leave, he took a hundred rupee note and put it before Babaji. "What is this?"He said, "Babaji, it is for the bhandara." Babaji took the note, tore it into pieces and threw it into the river. The man gasped, but had no words to say. He went away very sad and disappointed.Babaji said to me, "You didn't understand? You should never accept money or eat the food offered by a miser. You can never digest that! That man has so much money, but he never gives anything in charity or feeds anybody. I know him well."Buy: By His Grace: A Devotee's Story