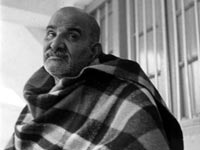 Babaji was in the habit of visiting a nearby village. One evening he came to the house of a devotee where he often took his food.

The lady of the house came out crying bitterly and said, "The person who used to serve you your food is lying there."

He lay dead, surrounded by the people who had come to arrange for his cremation.

Babaji sat down by the man, put a part of his blanket over the man's body, and began talking to the people around him.

Everyone was looking at Babaji and listening to him.

After some time, Babaji got up and said he would go and take his food somewhere else. No one thought of stopping him.

After Baba had gone away, the man lying there sat up as if from sleep and asked, "Why am I lying here?"

Everyone was so dazed that no one could reply.