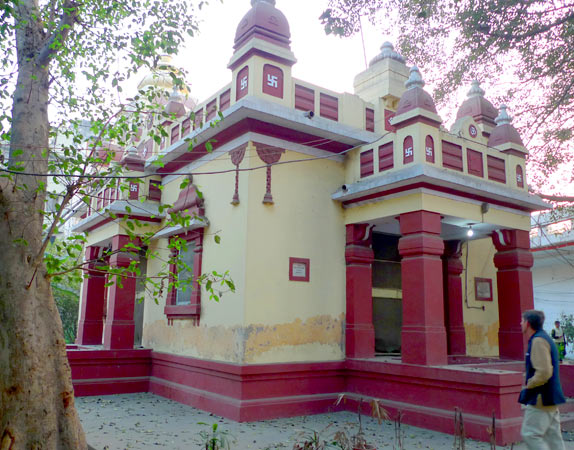 North Delhi Hanuman temple. This little temple is hidden beneath a flyover of Mahatma Gandhi Marge near the Yamuna River in North New Delhi.

Inaugurated on December 4, 1965, this temple is now almost 'secret'.

It is very difficult to find with a very obscure entrance in an unlikely place just north of the Ladakh Tibetan Market.

This temple along with the small ashram was built by Maharajji and funded by Jugal Kishor Birla, who had no children and left his fortune to various religious trusts.

Before the temple was built, Maharajji said that there was an old Hanumanji murti (statue) buried in the ground at the spot where this Hanumanj temple is located.

The murti was dug up and now sits in front of Hanumanji within the temple.

The pujari and 'caretaker' of this temple is named Sri Narayan Swami. The temple is operated by his family, under the Hanuman Ashram Society, one of J.K. Birla's religious trusts.

This temple is very deserving of contributions to be directed toward maintenance, plastering, painting, and upkeep.