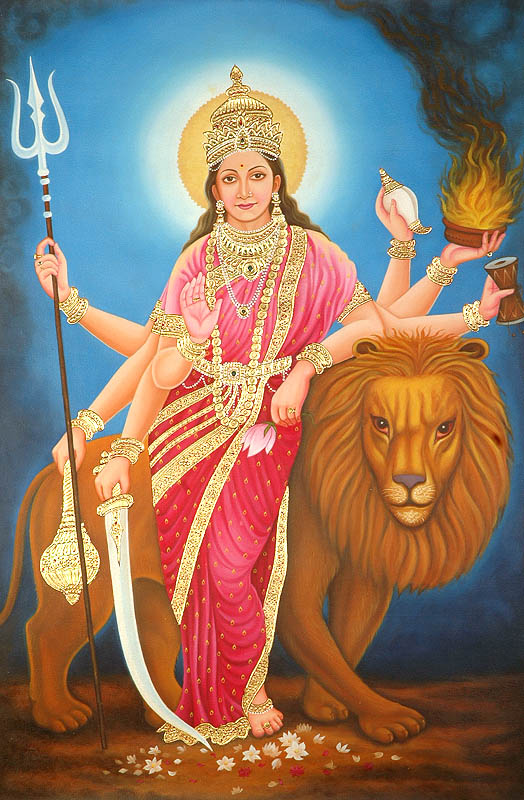 prayer. I don't know how to invoke you nor how to meditate, I have no

method of imploring deep pleading. But I know one thing for sure, if I follow

you (within the folds of your love) I will be released from all my troubles.

O, Kind Mother (the Liberator of all without discrimination), I don't know

the method of doing puja and I am also lazy by nature. I also do not have the

capacity to do the right kind of prayer, With all these shortcomings, if

there have been any mistakes, please overlook them. Because a son can be bad,

however, it is not in the Mother's nature to be bad.

O, Mother, on this earth you have many good sons and daughters but out of all

these I am the most bad child of yours 0, Goddess, you have forsaken me

because I have not concentrated on you, this is not reasonable, Because a son

can be bad, however, it is not in the Mother's nature to be bad.

O, Mother of the Universe, I have never rubbed your feet or done any sort of

service, I have not given you wealth, but even strangely enough, you are

bestowing your grace on undeserving me Because a son can be bad, however, it

is not in the Mother's nature to be bad.

O, Paravati Ma, Mother who has given birth to Ganesh, while I do prayers to

other gods, I remain busy with different kinds of works, all gods have left

me because I 'm eighty-five years, and I can not give them all the prayers. I

am despaired and I can not expect any help from them. If you also leave me at

this time where shall I go for support except to you?

O, Mother! If anybody hears even a word of your chant, the result is--even

and he becomes a very proficient speaker, The poorest man, you will find

even a word of your chant has such a result, the ones who are doing it

regularly and methodically, we can not fathom what the result will be, and

who is that mortal who can know it?

O, Goddess, Bhavani, the Adi-Goddess, the one who rubs his body with ashes

and whose fool is poison, and the one whose body is nude, and has matted hair

and a necklace of cobras and a hung skull in his hands as an alms bowl, gets

that name of Jagadeesh (the Lord of the World) what is the reason for this?

How did he get such an immanent position? It is only because of the union

with you, and by this his importance has increased

O, the Mother whose countenance is like the moon! I do not have any desire

for deliverance (moksha), I do not have any desire for worldly wealth. I do

not have any craving for knowledge. I also do not want happiness. . . so I

O, Mother! Shayam, (the blue-bodied one), I could not do methodically your

puja or prayer with various religious articles (demeaning oneself before the

Godgess). Always my meditation was not crystal clear because it had the

hurdness. What fault did I have with all these shortcomings? You bestow on me

the greatest grace which is only deserving of you. such a merciful mother can

give shelter to such an undeserving son.

O, Mother! Durga! The ocean of mercy! I am remembering you because I have got

all around me the difficulties. I did not pray before this. Kindly don't

consider this prayer of mine as my wickedness, because the child who is

suffering from hunger and thirst, only remembers the Mother.

O, Mother of the universe. I am not surprised, because of your complete

grace. A son may do fault after fault, but the mother never ignores him.

O, Mahadevi, Great Goddess, there is no sinner like me on the earth and there

is no other person condoning the sins except you. Knowing all this, you do

whatever you think is reasonable.