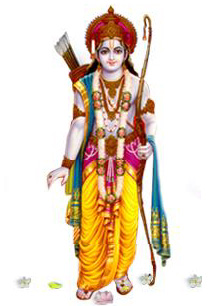 The epic known as the Ramayana. In some parts of India, it is a nine-day festival, coinciding with the Vasanta Navaratri (see also Navaratri). The public worship starts with morning ablutions, chanting Vedic mantras dedicated to Vishnu, and offering flowers and fruit to the god.

People keep a fast throughout the day, breaking it only at midnight with fruit. In some parts of India, especially Bihar and Uttar Pradesh, public gatherings called satsangs are organised to commemorate the birth of Rama. Excerpts from the Ramacharitamanas, extolling the glory of Rama, are recited.

People of all castes and creeds participate in these gatherings to listen to the stories and their explanations offered by the learned. The ritual of Rama's wedding is concluded with prasadam of 'vada pappu' (soaked lentil) and panakam (sherbat made of jaggery dissolved in water to which pepper powder and cardamom powder are added).