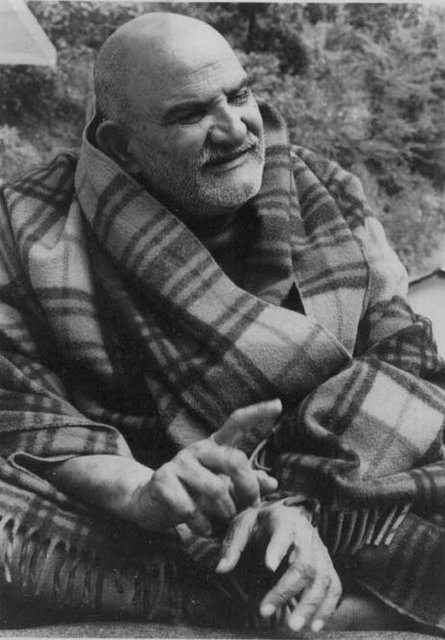 In January 1966, preparations were being made for Kumbh Mela, at Prayag, Allahabad.

On the bank of the Ganges, towards Jhansi, Maharaj got a camp pitched, so that his devotees could stay there and bhandara could be held there every day, He himself was staying at Church Lane.

During the day, he would go to Sangam and there was no fixed time when he would return. Visitors would wait for him at Church Lane every evening.

One day some important people, among them a high official of the Central Government, arrived by car. They waited for Baba until 8.30 p.m. arid at last, disappointed, they thought of going back.

When the Officer asked me, the writer, how much longer they should wait for Baba, I told the in that there was no fixed time for his return. When he would give darshan depended on his mood. I suggested they stay for another half an hour. They agreed to stay until 9 p.m. I asked them when they had had Baba's first darshan.

In reply, the Officer Luld me about an interest Ling event, which occurred when he was the District Magistrate at Jhansi. This story follows:   "One of Baba's devotees was the Civil Surgeon at Jhansi. One day during the course of a conversation, he told me that Baba Neeb Karori was a saint with high psychic powers and worth visiting. At times Baba had also come to their house and he told me some of Baba's Was, which made us eager to visit him. We had Baba's darshan once, at our friend's invitation.

During the Second World War, Baba arrived at the Civil Surgeon's house one day. The surgeon welcomed Baba and later that night, made a bed for him on a takhat. He thought he would himself sleep on the floor so that he would be able to attend to Baba, should he need anything.

Both of them went to sleep at 11 p.m. and at about 1 a.m. the sound of someone restlessly tossing and turning woke the surgeon. He switched on the light and saw that it was Baba. When he asked Baba why he was so restless, Baba gave him his blanket and said, "You go and throw it in water." The surgeon asked Baba if the task could wait till the morning but Baba insisted that he go straight away.

It was a dark night and there was no road to get to the lake by car. He woke up servants and after completing the task arrived back before dawn. He saw Baba sitting looking happy. When the Civil Surgeon asked, him the reason for throwing his blanket in the lake, Baba said, "Your son, [who is an army officer], was not able to face the German attack. A stampede was caused among his troops and he also ran away, but the German soldiers followed him. He jumped off the top of a ridge and got stuck in a marsh. The soldiers fired on him from above, and taking him to be dead, they left. All those bullets got stuck in my blanket and their heat made me uneasy. When you threw the blanket into the lake, I was relieved of my discomfort."

The blanket was new and there were no holes to be seen in it. The surgeon could not really comprehend what Baba had said but he was more at ease knowing that his son was safe and sound. Baba went away the next day. Many days after this incident, the surgeon's wife received a letter from their son. In it he told all the same details but expressed his surprise at some unknown power that had saved him from a rain of bullets. There was no possibility of his life having been saved otherwise. From their son's letter, the Civil Surgeon realized Baba's great blessing. By the time the officer had finished telling the story, it was 9 p.m. Just then Baba returned.