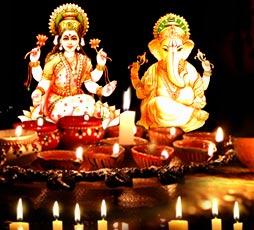 Diwali or Deepavali, popularly known as the "festival of lights," is a festival celebrated between mid-October andmid-December for different reasons. For Hindus, Diwali is one of the most important festivals of the year and is celebrated in families by performing traditional activities together in their homes.The festival of Diwali is not only significant to Hindus, but, has importance in Jainism, Buddhism, and Sikhism.For Hindus, it is associated with the return of Lord Rama to Ayodhya, after his 14 years of exile and victory over the demon Ravana. Lord Rama was welcomed to Ayodhya by lighting rows of oil lamps that symbolize the victory of good over evil and freedom from spiritual darkness.

Hindus, also make preparations to welcome goddess Lakshmi by drawing rangoli, and footsteps (Paduka) on the entrance that would allure goddess Laksmi to visit one’s home and bring prosperity along with her.

Diwali celebrations spread across five days, with each day having its own significance and set of rituals.

The first day is called “Dhanteras”, on which new utensils and silver ware is brought to the house. The second day is called “Chhoti Diwali”, which normally involves preparation for the next day and the tradition of playing cards is observed in many families.

The next day, or third day is the “Badi Diwali”, which involves the worshiping of mother Lakshmi.The fourth day is the Govardhan Puja and finally the five days end with Bhai Dooj, Hindu ritual for brother and sister.

The festival of Diwali is truly a “Festival of Lights”, as it not only involves lighting of Lamps but, it brings the light of happiness, togetherness, spiritual enlightment and prosperity for everyone.

With the sounds of crackers killing all bad-omens, the lighted lamps-lighting the lives of people, the prayers and pujas creating an atmosphere full of goodness and purity, the festival of Diwali indeed fills the atmosphere with an aura of goodness and a heaven like atmosphere.