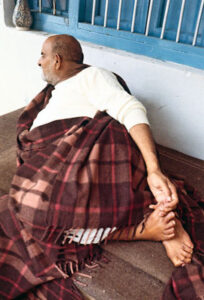 On his way to Kainchi, Iftiqar Hussein bought some mangoes to offer to Baba. One of the mangoes was a peculiar shape, and he had a fancy for it. It came to his mind that Baba could be regarded as an enlightened saint  if he gave that particular mango back to him as prasad.

He was also aware that Baba gave puris(deep-fried bread) and vegetables to every visitor, which prompted another idea to flash in his mind. His presumptions about Baba being an enlightened saint would be confirmed if Baba gave him warm halwa(Indian pudding) to eat.

Before Hussein arrived at the ashram, Baba gave instructions for the preparation of halwa. When Iftiqar Hussein arrived, Baba was in his room. After some time the door was opened and everybody went inside.

Iftiqar Hussein placed the mangoes at Baba's feet. Baba smiled and at once gave him the mango of his choice.  Iftiqar Hussein was amazed and said, "Master, I apologise for my thoughts."