Kakrighat is situated on the road to Almora from Nainital near about 20 km from Kainchi ashram. A river flows along its eastern boundary. Sombari Baba, Panjabi baba.

Here at Kakrighat, in 1890, during his travel to the Himalayas, Swami Vivekananda sat for meditation under a Pipal tree. Here he experienced the oneness of the universe, of the microcosm and macrocosm, and realized that in the microcosm of the body exist everything that is there in the entire universe. 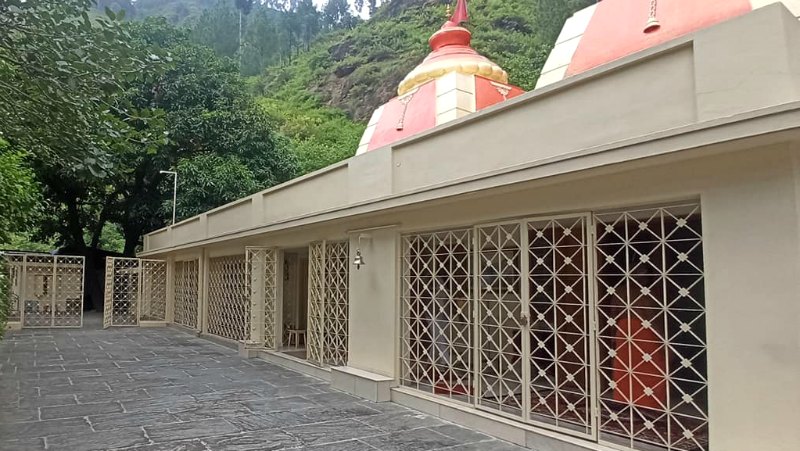 📖 The following story was told by KK Sah

It was during British time, maybe around 1915 or 1916. The Britishers used to go for a holiday. One British man went towards Kakrighat, which is a temple Maharajji built on top of Sombari Maharaj’s cave, an hour up from Kainchi. That British man came. Every British official was accompanied by one cook and one horse man, and one sweeper, three or four Indian servants. So he had his camp there and he went out fishing in the river. His whole day was spent there but he couldn’t get a single fish. He was very disappointed. In the night in his tent he could feel unnatural things, ghostly things. This was right by the river in Kakrighat.

He couldn’t sleep the whole night and the next day he asked these Indian servants, “What’s the matter?” One of the servants said there is a great saint here and you made a mistake by going there for fishing. So he said something about our Indian religion and our respect and regard for saints and sages. And he asked, “What should I do?” The British were very considerate, they had love for every religion.

So he wanted to see Maharaj, Sombari Baba. One of his servants said, “If you want to go, we’ll have to take some fruits, dry fruits.” He sent someone to ask if he could come see Sombari Baba. Maharajji said alright, let him come.

When he had been fishing in the river, there were naga babas that were sitting around Sombari Baba and watching that British guy. They got so angry they wanted to kill him, but Sombari Maharaj said it is not your dharma because you are not supposed to get angry. You are a baba, you should be calm and quiet and you must know that God takes care of everybody. You need not worry about them. God is there to protect everybody.

The next day in the morning the British man came to Maharajji with big plates of dry fruits and sweets. Maharaj said, “Okay, go and feed these to the fish.” You will be surprised to know that he threw these sweets in the river and the fish would come, they would smell the sweets and leave without taking any. It was a miracle for that British man. He again went to Maharajji, “What’s happened?” Sombari said, “You know, you are holding this country and you take everybody as your slave. Go again and feed these fish with love, don’t think of them as your slaves.” Again he went there and he started feeding the fish. This time they were jumping up to his shoulders. His clothes were totally drenched.

This is a true story. Sombari used to give teachings in that way. Firstly it was a lesson for the naga babas who were getting angry. They should not behave like this. Second thing, if you have love, you can conquer the heart of even a fish.

These photos were collected and submitted to maharajji.love by devotees from California. Special thanks to Jon Vasu Seskevich for kindly sharing photos from his personal archives. If you would like to submit any additional photos or more updated info about Kakrighat Temple, please contact our webmaster here.

➤ Here is a link to a video slideshow of photos and videos from the Kakrighat Temple, created by the same devotee from California: link here