Maharajji did not allow anyone to tape record his voice.

These particular recordings were done on three separate occasions in 1973. Two were done in Vrindavan in the March springtime, while the third was made in Kainchi on the 25th of June. I had seen on a few occasions when a tape recorder was introduced in front of him that he immediately demanded its removal.

While staying with Maharajji in Vrindavan that March, I got my hands on a cassette player of the earliest vintage. I decided that I would attempt to record his voice surreptitiously. These three recordings were made "without Baba's permission", and the original copies had an interesting life of their own.

The Story of the Tape Recordings from Kabir Das

At that time most of the foreign Satsang was staying in the newly built guesthouse next door to the ashram. Some evenings Maharajji would surprise us by coming out of the locked ashram after dark. One evening he came out and sat on a takhat across the lane at the thatch hut ashram of his neighbor, Hathi Walla Baba, so named because he kept a pet elephant (hathi) in his yard. Word spread to the guesthouse and I rushed to see Maharajji with the recorder hidden safely under my vest, and the microphone in my hand. I knew that if he did not want it to happen, he could stop it. When I got there, Maharajji was quietly discussing local affairs with Hathi Baba, while in the background the sweet sounds of the ashram kirtan wallas singing "Hare Krishna" came over the loudspeakers. Throughout the darshan, I sat on the ground beside Maharajji with the mike in my hand and hidden under my beard. In the background at one point can be heard the uncontrolled crying of a young foreign woman.

Some days later Baba came out of the ashram during the day and sat on the ground next to the construction site of the new Durga temple. I again came with the recorder under my vest and mike in beard. This time he sat on the ground with a group of us "foreigners" for almost the duration of one side of the cassette. Initially he is talking to Sri Ram, the mason, and throughout the tape, you can hear the "tap-tap" of the bricklayers as well as the continuous singing of birds. He talks about the Mother Goddess whose temple was being built, and joked with a few westerner devotees who were reluctant to accept his suggestion of their getting (or being) married.

That recording was an even better success, sound-wise, as well as content. He never "noticed" me, though he spoke directly to me on occasion. The very next day when I had darshan again, he surprised me by reaching over and pulling on my beard. He looked directly into my eyes and gave me his famous one-finger-up mudra. Of course, he knew what I was doing. But he never actually mentioned it and seemed to give his blessings to this play between us.

The voice recording lila continued a few months later when Maharajji had shifted to the Kainchi ashram. I was staying in a farm hut about two hundred meters from the ashram gates and about fifty meters across the potato fields from the ashram roof on which Baba sat for sometime most evenings. Maharajji frequently sent new people to stay with us. One boy had a new miniature tape recorder and he was keen to tape Baba's voice. I told him how to go about it, not allowing Baba to see the machine. He was too cautious as we discovered during a mid-morning break in darshan. Maharajji's voice was inaudible over the background sounds. He had timidly sat too far away from the takhat. The tape had only run for a few moments. Ever ready to get another and perhaps clearer recording, I borrowed the machine and was in place when Maharajji returned to sit on the takhat. This darshan included Baba talking to me about other foreigners who came to see Baba earlier that day, refugees from other "gurus". At one point after I respond to his question, he mimics my voice and my "baby-talk" Hindi. You also hear him speaking to Dada, telling him to feed everybody.

As soon as he entered his inner rooms for his afternoon of privacy, I sat on one of the ashram verandahs and played back the tape to satisfy my curiosity as to its quality. The machine had worked beautifully and I returned to my hut. Within the hour, a messenger arrived telling me to return immediately to the ashram and see Dada. 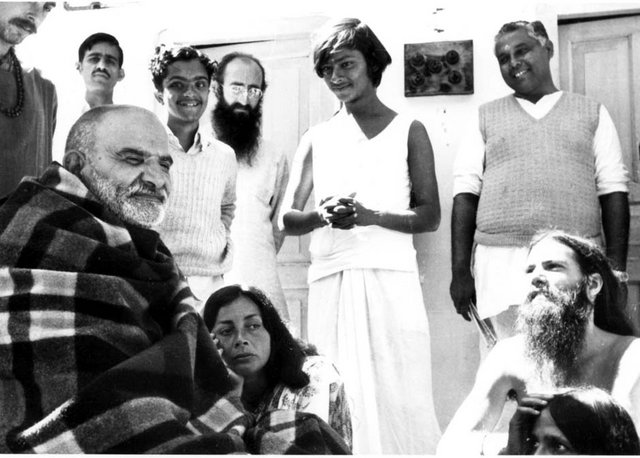 There I found Dada quite agitated. He told me that the Mothers had overheard my tape on the verandah and reported it to Maharajji. Baba got furious and told Dada to see that the tape was erased. What to do? Orders are orders.

I returned to my hut and was faced with a dilemma. I decided that I could still sort of comply with Maharajji's orders and keep the recording. Accordingly, I erased the earlier made and poorly recorded tape. I reasoned that Maharajji had not specified which tape, and had not instructed that two tapes be erased. When I returned to the ashram for afternoon darshan, I informed Dada that a tape of Baba's voice made earlier had been erased. During darshan that evening, Maharajji once or twice turned to me and with his fierce face on gave me the raised finger. The incident was never mentioned again.

Some weeks later, during the afternoon break, I and a few other westerners were sitting by the stream that ran in front of my hut. Several people were staying with us at the time and there was considerable coming and going. Someone returned to the hut to find that a thief had entered by the other door and had quickly stolen a few obviously valuable items. Included among these were the tape recorder and the case containing all of the cassettes, including the original recordings of Maharajji's voice. There were no copies. 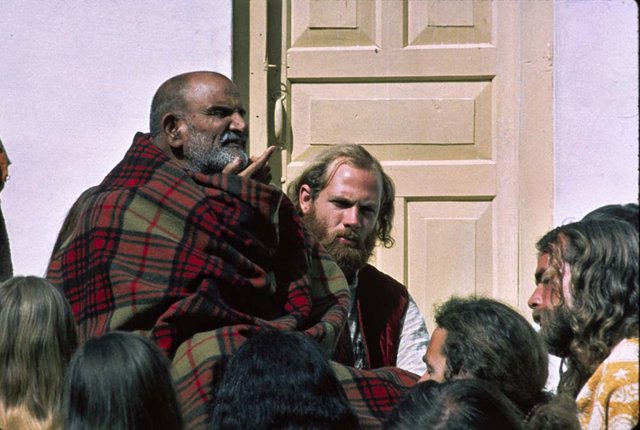 Though I was disappointed at this loss, I was resigned to accept the consequences of my actions. Maharajji had let it be known early on that recordings of his voice were banned, and had in fact told me through Dada to erase the one that had come to his attention. I did not obey him, and now they were all gone, along with a few other items. I knew that I had to bring the theft to his attention right away. This was the custom in Kainchi valley, where he was king. Upon hearing the news he got quite agitated, telling us that the place was full of thieves, and hadn't he told us again and again to keep our doors locked. Maharajji had said earlier that the dharma (duty) of a thief is to steal, while a householders duty is to keep his doors locked. That was that. The tapes were irreplaceable, and they were gone. But I still had Maharajji and I was not too concerned with the loss of the tapes.

That, however, was not the end of the story. Three or four days later, a young foreigner came up to me and asked if I was the person who lost the tape recorder. He then presented to me the plastic box containing all the cassettes. Miraculously they had returned. The tapes of Baba's voice were back in my hands. It appears that after all the lessons were learned, he wanted these recordings of his voice to be saved after all.

The person said that he had been wandering in the jungle above the ashram when he caught a glimpse of something tucked into a small cave formed by fallen rocks. He reached in and found the cassette case. Recognizing it as possibly mine, he searched fruitlessly for the other stolen items. Whoever had placed the tapes in the cave had saved them from possible destruction from the nearly continuous torrential rains of the past few days. Since then these tapes have remained the only known audio memories of Maharajji, with the exception of a short (30 second) recording of him singing "Ram Ram".