Inaugurated in January 1964, Panki Hanuman Temple is a very small temple on the outskirts of the city of Kanpur, near Panki Railway Station.

Within this temple resides the very wonderful and delightful Panki Hanuman-ji. It was said that during the bhandara feast held at the inauguration of this temple Maharajji was capable of feeding the whole city of Kanpur (current pop. approx. 50-lakh (5 million)).

A Mahasamadhi Bhandara is held here shortly after the mahasamadhi bhandara in Vrindavan. There are no accommodations here whatsoever at this time.

Babaji Maharaj fulfilled the wishes of the suppliants by his divine powers and is still doing so as before; only faith is expected.

His goodness to his devotees also expressed itself in the way he would fulfill their fond expectations, trying to save them from disappointment. This was revealed during the opening ceremony of the temple in Panki, Kanpur.

Babaji was at Allahabad for his winter stay. Devotees coming from Kanpur requested him to bless the occasion by his presence, which he did not agree to do.

They went back feeling disappointed and sad that all their efforts had failed.On the day of the inauguration, Babaji finished his toilet, and changing his clothes early, went back to his room.

It was seven o'clock. He told me that he was not feeling well, covered himself with a blanket and asked me to bolt the doors, not allowing anybody to disturb him or enter his room. Hours passed, and the people waiting outside for darshan started speculating about his trouble. At twelve he opened his eyes, asked me about the time and said, "Oh, it has been five hours that I have been asleep, but such a nice sleep that I feel refreshed." The doors were opened, and people rushed in and had their darshan. Life began again as usual. The next day, Babaji was sitting in the hall surrounded by his devotees when a person came with a basket of ladoos - prasad from the inauguration ceremony of the Panki temple the day before. Being handed a basket, I was told that Babaji had been there in the morning, but at twelve he suddenly disappeared. "We searched for him, but he was not there, so we brought the prasad for him."

Mr. Jagati, an old devotee, asked, "What are you talking about? Babaji was here lying on his bed feeling unwell, and we were waiting for him outside. The door was opened at twelve and we all saw him. So how could he be at Panki when he was in his room all the time?" While they were all trying to convince each other, Babaji was sitting silently with his smile. This incident reveals so much about his invisible movements to fulfill the wishes and expectations of his devotees.

~An excerpt from Near and The Dear 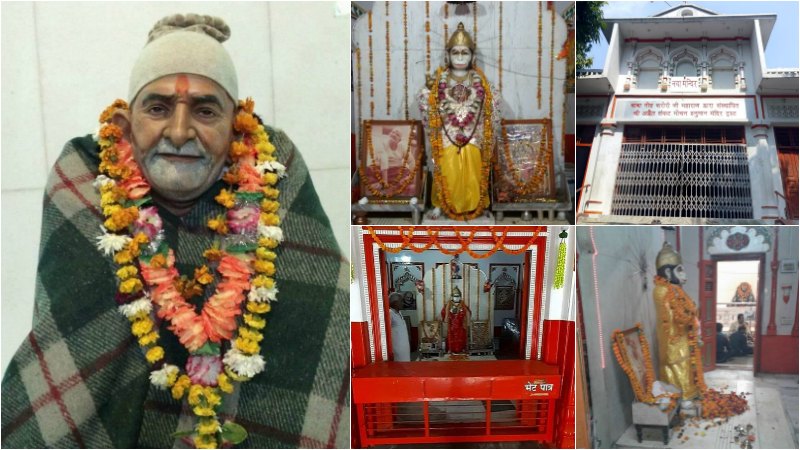 These photos were collected and submitted to maharajji.love by a devotee from California. If you would like to submit any additional photos or more updated info about Panki Hanuman Temple, please contact our webmaster here.