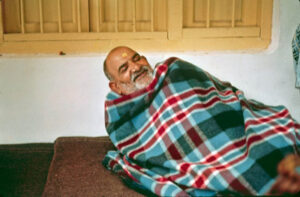 When I first came to Kainchi, I did not know the ashram way of life, nor was I acquainted with the people there. One day I saw a relative of mine taking a piece of roti(bread) from Maharaj's room. I got curious about it, and he told me that it was called mahaprasad(specially consecrated prasad).

I understood that it was the leftover food from Baba's meal, but my desire was not limited to a piece of bread. I thought that I would be very lucky if I got the entire leftovers of his meal without asking for them.

The very next morning, after Baba finished his meal, he asked Shakuntala to give me all the leftovers. I did not know Shakuntala then, but she came to my room bringing Baba's thali(plate).

She said, "This plateful of Maharaj ji's prasad has been sent for you."

Then she gave me the plate, which she had covered with a piece of cloth. I was very surprised and deeply moved. I thought myself very fortunate indeed.

It was my experience that Baba fulfilled all sorts of desires, no matter how trivial, whenever I was in Kainchi. Consequently I felt that I was giving a lot of trouble to Baba by desiring things unnecessarily. I resolved not to do so, but when other such occasions arose, I forgot my resolution or found myself hopelessly lacking in determination.