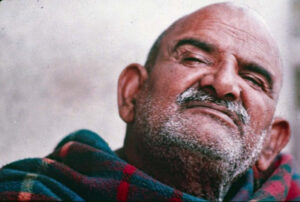 An aimless, unemployed youth came to meet Baba one day. Baba took pity on him and got him a good job through people present at the time.

He also spoke to members of the boy's family and arranged for his marriage into a good family.

Baba gave him the opportunity to lead a happy  and comfortable life. After getting the job, the youth increased his expenses to such an extent that he became distressed.

His family became a burden to him, and he lost the ability to think rationally.

He blamed Baba for his marriage and held a grudge against him.

One day, on the pretext of having darshan, he went into Baba's room at the house of Mehrotra ji in Lucknow.

As soon as Baba saw him, he put his blanket aside and baring his chest said, "Kill me if you want to."

The youth was stunned to see the expression on Baba's face and at the exposure of his own thoughts. Holding him by the hand, a devotee immediately took him outsied and asked him what the matter was.

The man confessed that Baba had revealed his true motive. He felt utterly humiliated and left with his head bowed.