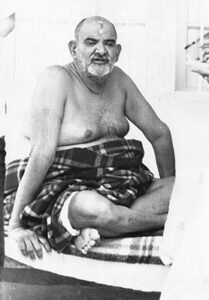 One day Baba arrived with some devotees at the house of Prem Lal, the manager of Titagarh Paper Mills in Lucknow.

Prem Lal had engaged a new servant to clean in the kitchen who was keen to have Baba's darshan.

After finishing his work, he sat on the doorstep of the room in which Baba was sitting.

His upper body was bare, and he sat with his head bowed in reverence. Baba asked him, "Whenever you visited your guru, you gave him one rupee?"

The servant confirmed this by nodding his head. Baba then said, "You have brought a rupee tucked in your waistband for me?"

The servant took out the rupee and gave it to him.

Maharaj, who would refuse the offerings of lakhs(hundreds of thousands) of rupees accepted a rupee from a poor man with great affection that day.

Sending him away he told his devotees, "A rupee from this poor man is more valuable than your twenty thousand rupees."