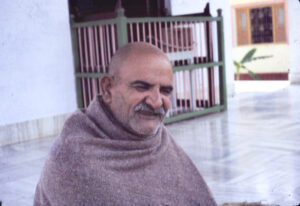 One day Thakur mahavir Singh of Agra told Maharaj, "You love Karanvir so much, yet he calls you a mad baba."

It made Baba laugh heartily, and he said, "This is the reason that I like him most. People come to me with some motive. He only comes to me with love."

Thereupon Thakur said, "Why don't you reform Karanvir when you like him so much? See, his elder brother neither chews betel nor smokes. He always occupies himself by doing well for others. But Karanvir is fond of all sorts of nonsense and his health is always impaired. Why don't you make him realise it?"

Baba unexpectedly became serious and said, "Mahavir, you should not count on your elder son. Karanvir will improve with time and fulfil all your expectations."

Mahavir Singh did not take Maharaj's words seriously at that time. Two years later his elder son died. Karanvir was so touched by the pitiable condition of his grief-stricken father that he decided not to do anything that would hurt his feelings. Baba's words proved true. As far as he could, Karanvir Singh fulfilled all his father's expectations.