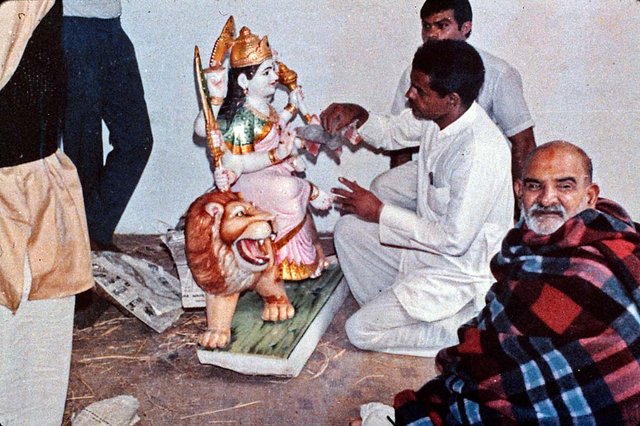 The murtis of Hanuman and the other gods and goddesses are considered to be alive. But how do they come to be alive? In Bengal, at Durga Puja and Kali Puja, murtis are made of clay, straw and bamboo sticks. In my childhood days in the village, I would help in collecting clay and gathering straw for the elders to make the murti. The last stage was painting and dressing. When the murti was to be installed as Devi, the priest came and did the ceremony, pranpratishta, that is, bringing pran [the life breath]. Until then it is not Devi, just a statue. The puja brings breath, making it alive, and it becomes Devi Herself. The mantra has made it living. But the love and devotion of the devotees also make the murti live. Hanumanji and the others would be just statues if they had not been consecrated and made alive by devotion and love.