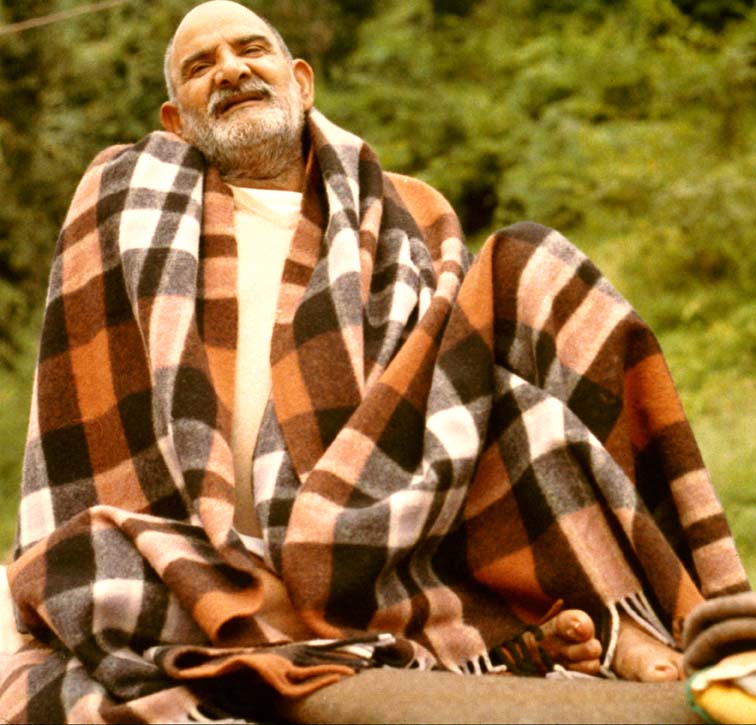 Nowadays people come to me and say, "Dada, shall we see him again in his body?"I say, "Look here, you may be having his darshan, but if I see him again I will say, 'Do not come in that body anymore!'

He carried us in his arms for twenty years and what did we learn? Now if he would give a glimpse of that body, what would that do? What are we missing simply because he is not in a body? He has lived for us, he has given everything to us. I have no need to see that body again."There are stories of Maharaj ji being seen here and there. I do not take them seriously, but perhaps these people are very keen to see him in that form and he comes. But what body he may be in, I do not know. That he is alive, of course, that I do know. I have never said that he is not alive. Otherwise how do we feel so strongly that he is here with us? How are so many persons still coming to him? But for those who have known him for twenty or thirty years, did not take much interest, and now suddenly want to see that body, what is the use of that?

Deoria Baba, himself a great saint, comes to Allahabad every year during the Magh Mela or the Kumbha Mela. A few years back he was here and some of his devotees who are well-known to us came to our house for satsang. They said that the night before they had been sitting around Deoria on the sand and someone came who said that he used to go to Baba Nibkarori, but he is not there anymore, so he cannot go. Deoria Baba actually shouted at him, "What are you saying? Can such a saint go anywhere? He has done such tricks many times before! He is alive, and he always will be alive!"It has also been told that Deoria Baba said that if persons had not been trying to keep Maharaj ji in the ashram and sitting around him to create a barrier or enclosure, he might have stayed longer here. Two things are very interesting: that he wanted to go away and that he has never reconciled to this kind of life of the ashram. He was essentially a tramp, a free spirit. There is no record of how many years he was wandering here and there, just bits of stories that we have got of how he was seen in so many places. It was only in the latter part of his life that all these ashrams were created. Even then he would not be in the ashram all the time. He would go out to many places—to Chitrakut, Amarkantak, Jagganath.The third thing was said by that saint who came to our house and entered Babaji's room and saw his picture. He explained that Babaji was in sahaja samadhi, the samadhi that comes automatically, spontaneously. He said, "Look, the body is there, but don't you see that he is not in the body?" I myself had seen that. In the beginning, I used to get a little annoyed that he was in that kind of samadhi, especially when people would come to touch his feet, or sit close to him, or have prasad. But afterwards I became reconciled.People asked me so often, "Why does Babaji go on covering himself with a blanket?" Not only would he wear a blanket in the winter when it was cold, but also in the hottest summer months. I used to say that there were two blankets: one blanket covered his phyical body, that we all knew. It was not indispensible; it could be thrown off. Some miracles were no doubt done through it: he would be taking something out from under it, sometimes the blanket would be very heavy, sometimes it would be light, and there was the smell of a baby in it. But there was another blanket that was inside. He was covering all his sadhana, all his siddhis, all his achievements, all his plans and programs. Why was he hiding all this? Perhaps it was for our protection, perhaps to save himself from crowds of followers. We cannot know.When Babaji said, "You stay at home," I did not know what it meant. Now I understand. I am actually within those four walls most of the time. When he said to me, "Dada, what is family life for you? Become entirely my own," I said, "Hah, Baba, thik hai." [Yes, Baba, that's fine.] When he said, "Become entirely mine," I did not know what it meant and said yes. Now I see that my thoughts, my ideas, my vision, everything is concerned with him, nothing other than him.