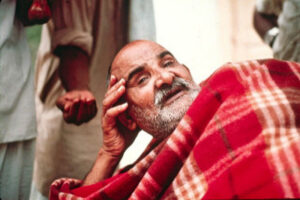 Shrimati Durga Sah had heard of Baba, as every household in Nainital knew of him by that time, but she had not found time from her housework to visit him at Hanumangarh.

One when Guru Purnima(full moon day dedicated to the worship of the guru) was being celebrated in Kainchi, she went there in the company of some other women.

When they arrived, puja to Maharaj was being performed.

After her first glimpse of Baba, Durga Mai received so much grace that a wave of bliss passed through her body.

She remained sitting with her eyes close and felt that she was having the darshan of Hanuman through Baba.

A few months later many of Maharaj's devotees from Nainital were going to Vrindavan to see him.

Durga Mai was keen to go with them but felt unable and helpless due to family circumstances. She was sad at heart since everyone known to her had left for Vrindavan.

In the meantime a woman who had not gone telephoned Durga Mai's husband and persuaded him to allow his wife to accompany her to Vrindavan.

When she reached the ashram and bowed to Baba in reverence, he said jokingly, "I had to chant a mantra to call you." She was overwhelmed.