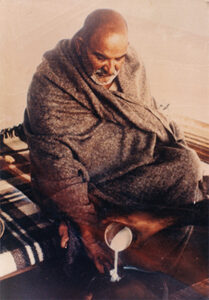 During the months of January and February the annual Magh Mela is celebrated at Prayag Raj , i.e. Allahabad, and this even attracted a number of foreignmers who had taken to sadhu life. Since the circle of foreign seekers was always few in numbers and close knit, inevitably a few of these sadhu types visited Maharajji's camp on Church Lane.

A few of these men had taken to wearing the complete sadhu uniform, complete with sectarian marks applied to the forehead with colored paste. This indicated the lineage of their gurus, and differentiated them from all of the dozens other sadhu sects.

Maharajji, of course, was familiar with these "sign-boards" and he drew  our attention to them by asking these people why they were wearing them. Their answers were not as memorable as Baba-ji’s comments to us that these signs or any external sign of one’s spiritual life were unnecessary.

First of all they indicated a separation between the wearer of a particular sign from those wearing other signs or none at all. Secondly Maharajji repeated what he had told us many times in the past, which was his message of the unity of all religions and the oneness of God. He had told us before that Hanuman and Jesus were the same. He seemed to be clear that there was no need for us to align ourselves with any particular sect or limit ourselves by claiming to follow one path.

Some of these boys were wearing the signs of the Vaishnav Ramanandi sects, and no doubt Maharajji was very familiar with these sadhus and possibly their limitations. Maharajji wore neither caste nor sectarian signs.

He had transended many of the things which we use to give substance to our self-identity. Earlier pictures show Maharajji wearing the Brahmin sacred thread in the fashion favored by Ramanandis. But during all the years he was known as Neem Karoli Baba the so-called sacred thread had been “Jao-ed.”