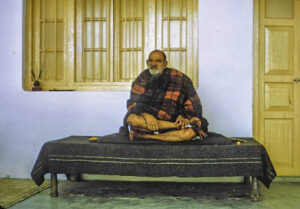 My paternal grandfather and family lived in Nainital. One day, they were walking by the lake when they found Babaji sitting by the road. They took him home; he agreed to eat and stay the night.

In the middle of the night they heard screams from Babaji's rooms. They entered the room to find Babaji sitting on his bed, with a blanket covering him. Babaji was crying inconsolably. They removed the blanket to find that he was vomitting blood and telling them that he had to leave right away because he was suffering from TB.

My grandfather tried to convince him to leave in the morning but to no avail.Finally, my grandfather asked my father and his brother to escort Babaji wherever he wanted.

They had walked about a mile when they saw a man, holding a lantern, walking towards them. Babaji started gesturing to the man that he knew was coming.

My father asked this man who he was. He told them that he had come from another town, looking for Babaji, because there was a devotee of Babaji who was dying of TB.It was his last wish to see Babaji, before he died.

It turns out that by the time they reached the devotee, he had been cured. (In those days, TB was incurable.)