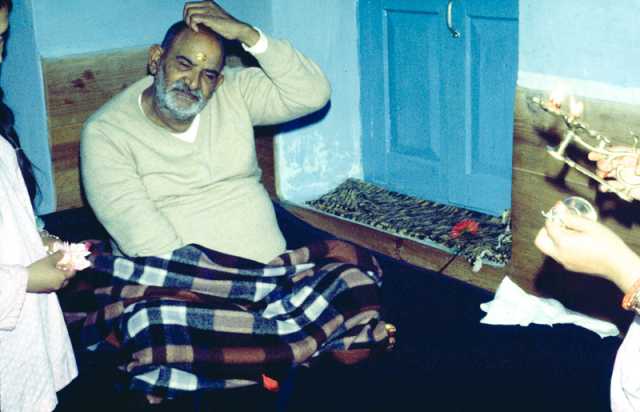 One day I was travelling by a double-decker bus in London and had occupied a seat near the entrance. There was nobody by my seat and the conductor was on the upper deck. the bus was almost empty. Suddenly the bus stopped and an old beggar got on. He was wearing many layers of tattered clothes and was holding a red and blue blanket in his hand. He stood in front of me and looked at me with a gentle smile as if saying, Move aside I want to sit by you. I moved aside and he sat down.

I do not like staring at people, so I turned my face a little and peeped out of the window. At the time I thought, what a lovely smile he has. How nice that old man is! The words old man turned my thoughts to Maharaj. I had always heard that he was known as "the old man with a blanket", so I turned my face to see him again and was surprised to see that the seat by my side was vacant. It had only been a few minutes. Where did he disappear ?

I looked outside but the bus had not stopped anywhere. If he had wanted to get off the bus, how could he?

The road was deserted, and the beggar was not to be seen anywhere. I could not understand how it had all happened, and it was not a case of hallucination.

The next day some of my friends came to me and said that the previous morning (the same time that I was on the bus) they had had a sudden inspiration to help me buy a ticket to go to India to visit Maharajji. It was all rather strange. Although the amount offered by my friends met my travel expenses, a poor student like me had no means of subsistence in India.

Maharaj had to show another miracle to solve this problem. In England a student gets travel expenses from the university to go back home after the end of each term. I had applied for this, but I was surprised to see that the authorities had issued a check for double the amount that I had asked for. I pointed out the mistake to them by telephone, but going through their account books, they informed me that the amount paid to me was correct. I finally realised that Maharaj wanted me to have his darshan.