LilasNear and The DearBaba, You are the Saint of Saints 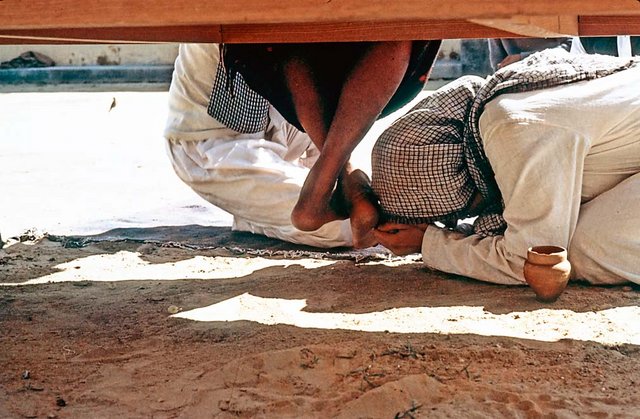 One morning Babaji was in his small room in Kainchi. A sadhu with a half-dozen of his disciples came for Baba's darshan. I took them to his room. After they had taken their seat, Babaji said, "This is Mahant Digvijaynath, a great saint. Bow at his feet." When another person came, Babaji made him bow as well. Babaji smiled and asked people to bow low to the saint instead of touching his own feet. But when the third one came and Babaji repeated his words, the Mahant stood up and clasping Babaji's feet, with tears in his eyes, said, "Baba, you are the saint of saints sitting before us, and you are making people touch my feet, taking me to be a saint."

"A saint can be known only by one who himself is a saint." That is what has been said by the wise. So we cannot have - at least speaking for myself - any pretension of knowing Babaji, the great saint. In the Bhagavat Gita we learn that a saint is a person with a dual personality - the divine and the human. Many of us have seen the human person in Babaji, but that doesn't mean that we can claim to have seen the divine person in him.In a saint, the divine person is encased in the human frame but is not entirely identical. The bottom of the human and the top of the divine stand far apart from each other. There is a co-mingling in the inner space, and in noble human beings, some of the divine qualities merge entirely with their human qualities, destroying all distinction between human and divine. I am saying this about Baba from my own experience of him- I have never seeing him wearing his divine crown, but I have always seen his divine qualities of love and compassion. He was always ready and alert to mitigate the sufferings of the helpless by taking their pains upon himself. His body became a honeycomb of diseases. This was the price he had to pay for his compassion and his readiness to help.