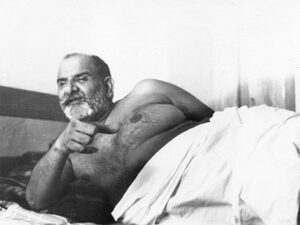 One night Shrimati Kamla Pande had a dream in which she saw Maharajji sitting on a takhat in the front room of a house on the roadside. He was looking outside through the door, and some young men were passing by singing obscene film songs. Kamla ji, Sri Ma, and Sri Jiwanti Ma were also in the room and appeared disturbed by the young men's indecent behaviour before Maharajji.

Next she saw that Baba called those young men and asked them to sing a song. They came and sang many devotional songs of Kabir, Mira and other saints. Baba said to them, "I called you to sing the same songs you were singing in the street." They appeared ashamed and joining their hands in respect said, " Baba, we have forgotten those songs and we know only these devotional songs."

Baba turned his face towards Shrimati Kamla and whispered in her ear, "I do not know anything. I just know how to change hearts."