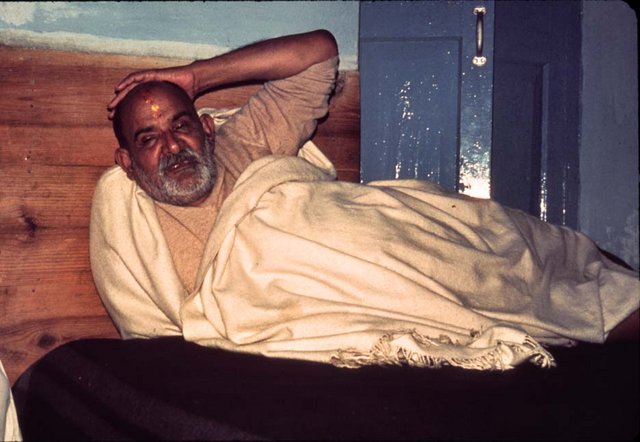 I was working as a lecturer in Govt. Training College, Allahabad since Jan 1946. Mrs. E.B. Joshi was the principal of the college that time. She was very well known throughout the State on account of her deep knowledge and wisdom. Later on she was selected in Indian Administrative Services and joined her new post in 1952.

This college was completely shifted to Agra in July 1950. All the teachers and the students resided together in one hostel at Agra. The Bangalow allotted to the principal was quite spacious and was at a little distance.

I and one of my fellow lecturers used to go for sleep at night in that particular bungalow. In the evening Smt. Joshi would talk to us regarding many subjects and we felt ashamed on account of our ignorance about these subjects.

One day in 1950-51 during her talks about the saints and sages she referred to one saint who used to come from Almorah. She told that he is omniscient, omnipresent and whatever comes out of his mouth becomes truth. Since the very day I developed an intense desire to see this miraculous Baba.

In July 1952 the college was shifted from Agra to Allahabad again. One girl student Km. Nandi Pant took her admission in 1954-55. She lived near my house in 157 Colonelganj just on the opposite side. She lived with her mother, father and one brother.

One day this very student told me that some saint visits her house and jocularly tears the currency notes and says to pick it up and go to vegetable vendor and give it to him. When she goes to the market with note and all the way thinking in her mind that if the note is found in pieces she shall feel ashamed and the vegetable vender shall not accept it. But when she goes and opens her closed hand she surprisingly finds this note to be intact. She is struck with wonder, pays to vegetable vender and comes back with vegetable to her home.

She must have seen very many miracles like this before also. One morning my desire became more intense to get the Darshan of this great saint.

I requested Nandy to please let me know whenever this saint visits her house next. I would like to have his darshan.

On June 17,1955 at about 9.30 in the evening Shri Shantimoy Roy proprietor Esray & Co. Chowk, Allahabad a fast friend of Prof. Mukerji, had come and were talking something during dinner. My brother-in-law was also sitting by his side there. My mother-in-law and Maternal aunt were busy in their pooja, arati and jap in Pooja Room. I saw Km. Nandi Pant coming in my courtyard swiftly. I was the first one to see her. On meeting she informed that Swamy Ji has just arrived and she wanted me to come to her house for Darshan.

Without thinking anything I got ready within no time. But a thought came into my mind to customarily inform my mother-in-law and maternal aunt about it before leaving. When I told them about this, these two ladies also became ready with out giving any thoughts. It was also necessary to inform Prof. Mukerjee before going. Keeping this  in my mind I went near the outer gate where Prof. Mukerjee was sitting. I informed him that we are going out to neighbour's house for a short while and shall return soon.

Mr. Shantimoy Roy sarcastically remarked "Where are you people going in the night?"

I replied that we are going to have Darshan of a Mahatma who has come in neighbour's house.

Mr. Shantimoy Roy said smilingly, but in a higher tone of his voice "Ask your Baba whether he would like to eat something ?" (Shanti Dada was fond of hunting and would often go to jungles for this and would bring deers and Antelopes) There are still some stuffed pieces in his house hanging on the walls of his room. Here he meant non-veg preparations for his meals. While going I simply said, "One should not talk like this to saints and sages."

When we reached  her house, we found Maharajji Iying on a bamboo cot covered with an ordinary durry. He immediately got up after he saw us and asked,

"Where have you come from ?"

We told him our names and addresses as well. After introducing ourselves we hoped Maharaj ji would ask us to sit. After waiting for a moment we wanted to sit. As soon as we were ready to sit down he said "Go and serve tea to Bengali friend of your husband who has come there", I said "my brother-in-law is there to serve them tea."

"Kamla ! you go I shall come to your house tomorrow". After hearing this we had no courage to disobey him. We came back immediately after five minutes. Every body was quite anxious to see us back so soon and asked us as to what had  happened. When Shanti Dada heard our narrations he too was astonished.

I was quite disappointed after my immediate return. Prof. Mukerjee also got unnerved but did not divulge his anxiety. Various thoughts came into my mind throughout the night. I thought whether Prof. Sahib would like to come along with us to bring Baba Ji to our house tomorrow. If he does not go what shall I do then ? When I said to Prof. Mukerjee next day in the morning, he after washing his face and hands became ready to bring him to his house, I put on chappals while going out as I have no habit  to go on the  road  barefooted. No sooner did  we enter  his room and saluted him, than  he saw Dada and got up immediately and said "let us go."

I had spread one bed sheet on the Wooden Cot in my mother in law's room and put one pillow and a hand made fan before going to bring him. I had also put curtains on the windows too. After arrival he sat on this wooden cot and said.

"This is my house. Now onwards I shall stay with you."

Whenever Maharajji came to Allahabad he stayed with us here onwards. There used to be great rush of visitors and devotees. He used to come in any month and used to bring some of his devotees along with him. My house was of old style and was full of inconveniences .

Whenever he came he use to say to us, "When are you going to build your house ?"

"Why have you not purchased the land uptill now ?"

"Kamla will get her house built."

"It shall get built automatically."

When he came next, he said to Dada, "Dada you will have to leave this house soon. Your maternal uncle shall soon insist you to vacate his house."

After a  few months, Improvement Trust Allahabad auctioned a  no. of plots belonging to Colonelganj Inter College. We purchased one plot out of these plots. This present house was built on this very plot.

Third time when he came he put up a question "Have you built  your house ?"

Prof Mukerjee kept mum after hearing his question and said "I have purchased the land."

"Kamla ! tell me how many  bricks are required ?"

I said,  "I have no idea Baba, only engineers can tell." Instantaneously he would say,  "Kamla shall get it built."

"It shall get built automatically".

We purchased land in the year 1957 and it was built under the supervision and guidance of Shri N.K. Agarwal and Shri K.K. Aggarwal Engg. Architects and contractors. The construction started in the month of February and was completed in the month of July. We shifted to this house (4 Church Lane) on 14th July 1958.

Maharaj Ji came soon and was very happy to see the progress and said this house is excellent and gave a name to this house as "Red House" because this house was painted in  red colour.