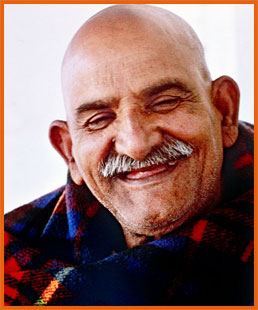 On October 12, 1974, a holiday, I went out to a bookshop about twelve o'clock. My mother, my auntie, my brother, all were sitting on the porch.

About one o'clock I returned and went through Babaji's room to go to my own. I found that the picture of Maharaj ji's feet that was always kept on his bed since his mahasamadhi had changed direction. It had been facing south, now it was turned to the east. The odd thing was that the picture had been turned, but the line of flowers had not been disturbed.

There was also a copy of the Hanuman Chalisa there that Maharaj ji used to keep under his pillow. When children came, he would take it out and say, "Read from this." That Hanuman Chalisa had been taken out from under the pillow and placed in front of the picture.Usually I put gardenia flowers before the picture, but that day for some reason I had put a saffron-colored flower from a creeper in the garden. It had no smell, so it was not normally used, but we called it "Hanuman's flower." That flower was put on top of the Hanuman Chalisa.

I asked, "Who has turned this?" They said, "We have been sitting here the whole time, nobody has come, so no one could have turned it."When other persons came to hear of this, they said, "Maharaj ji has revealed himself. He actually placed the Hanuman Chalisa there and put the flower on it!" Now October 12th is an important day. We have a Sundarkand reading and bhandara each year on that date.From then on I put flowers on the bed a little more systematically. After some time a sadhu came and the question came up about why the direction of the photograph had been changed. He said, "You do not know? He was facing south. South is the gate of death, people go by the south gate. He was showing you, 'Do you think that I am dead?' and therefore changed direction."I went on placing the flowers and the idea came, "Let me write 'Ram Ram' on the Hanuman Chalisa," and with small flowers or leaves I began doing that. After some time, the idea came that I should make a symbol of Babaji's feet. That is how the flower arrangements started. In the beginning, when it was changing almost every day, the devotees wanted some sketches to be done. At first I said no, but they kept asking and Didi said she would do the sketches. Now there is no escape from it; we have to do it. It takes three hours or more, but every day it is done. I do not know what or why it is we must do it, that's all. Perhaps it is to keep us occupied.