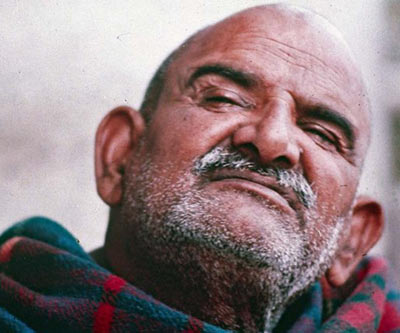 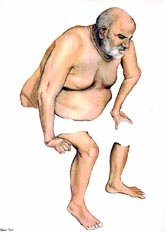 Jai jai Neem Karoli Baba, please give me your grace and true feelings. How can I begin to sing your praises, when I don't even know the name of the place you are from? All you need do is give the glance of grace, and disease, grief, sorrows, and poverty are snatched away. People cannot fathom you, only those who receive your grace can sense who you are. Offering you all, body, mind , and soul, one achieves that rare celestial happiness. Seeing and touching you, Oh Lord, one has their home filled with happiness and wealth. Jai jai, bestower of happiness to saints and devotees, giver of all powers, success, and wealth. You are Vishnu, you are Rama, you are Krishna, roaming about you fulfill beneficial desires. Jai jai jai jai Sri Bhagavanta, you are Hanuman incarnate. Just as Vibhisana said, "I know the supreme truth (that) Without God's grace one cannot meet saints, and with their grace comes the end of suffering. I was convinced of this the day I had your darshan. Whoever remembers you in their heart has all problems and obstacles destroyed.