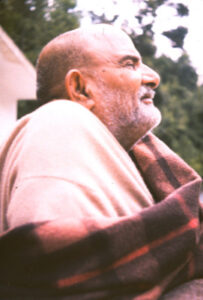 Once, while Pooran Chandra Joshi was attending Maharaj, he stayed in Bhumiadhar ashram for about fifteen continuous days. During this time he did not even think of his family or his office. Some people suggested to his wife that he might intend to become a sadhu.

They said she should inform other members of the family so that they could have a timely word with him to deter him from this course.

She did not believe that her husband would ever become a sadhu, and she did not want to involve other family members unnecessarily.

She was, however, worried about him.

The very next day Baba came to their house from Bhumiadhar and said to her, "You think that your husband will become a sadhu? Don't worry about it. If he could become a sadhu, I would have immersed you in bliss."