The original site was published in very simple form on a geocities.com site by Jai Ram in 1997. Printouts of the site pages were carried to Mataji in India by Sadhu Ma in early 1998. Mataji sent a message back saying that for Jai Ram to do this site work for Maharajji, he must "come to the source." That is exactly what happened.

After Jai Ram and Radha returned to America with Gurudat Sharmaji, to begin his three month USA yatra, in May 1999, the final pre-launch work was done on the site. The materials at neemkarolibaba.com (now maharajji.love) were first published on the Web in July, 1999. 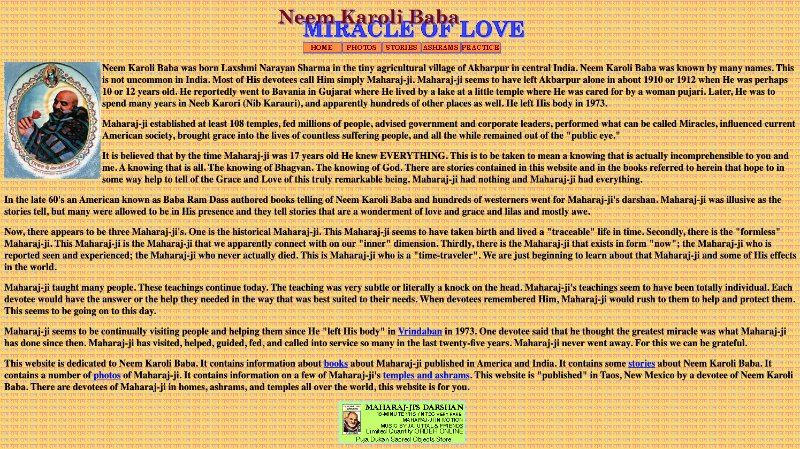 Materials have been continually added to Maharajji's Global Web site since 1999 - including video and audio of Maharajji, many more photographs, additional stories and books. Many people also came, in America, and brought materials or stories that were incorporated into the Web site. 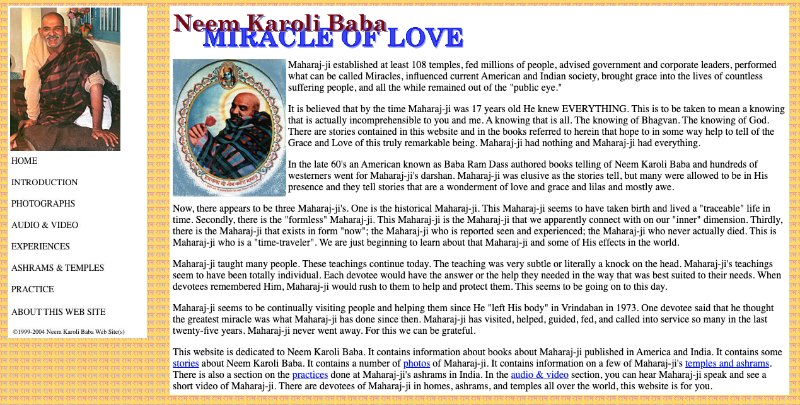 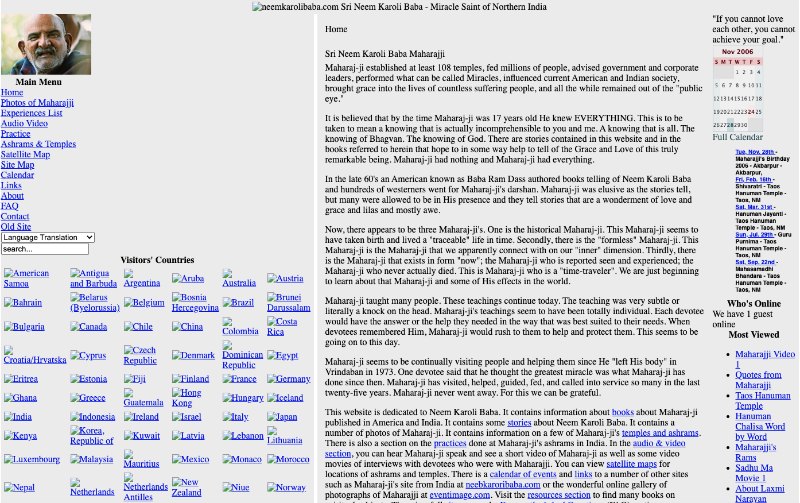 Version 4 of neemkarolibaba.com was an upgrade that took several years to achieve. Radha Rani became ill with cancer in 2007. Jai Ram and Radha moved from Taos to India for her treatments. Unfortunately, Radha Rani died on January 1, 2009. 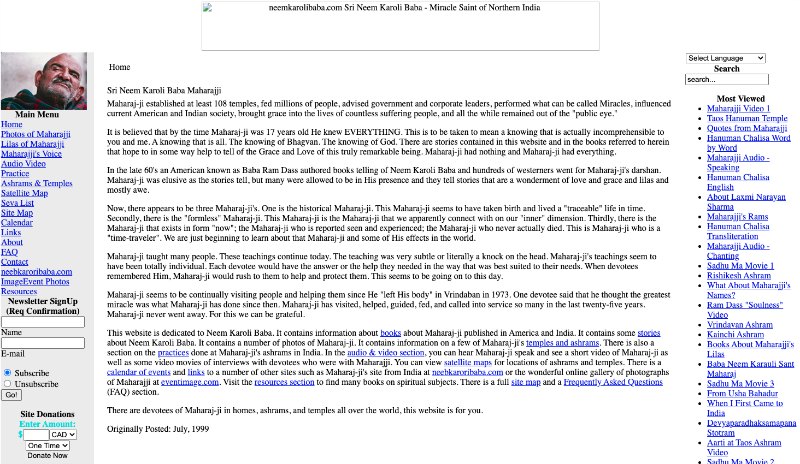 During the time of Radha's treatments, neemkarolibaba.com was continually beseiged by attacks from malecious hackers, which Jai Ram and the server wallahs defended against successfully many times. Finally, by around October 09, the hackers even managed to take the site down completely for about 6-8 months.

Screenshot of the bottom of the front page of maharajji.com (source: archive.org)

In October 2011, Jai Ram and sevak Urvashi began a project of moving all of the remaining content in version 4 into version 5.

Version 6 of maharajji.com was inaugurated in June 2015 with a full site "mini-migration" upgrade of the CMS technology from Joomla 2.5.28 to Joomla 3.4.1.

In December 2017, Jai Ram merged with Maharajji. A year later, in December 2018, the hosting service expired and maharajji.com went offline.

In July 2019, the site was brought back online by Maharajji's devotees from California and India. The pages were put back together from the Web Archive. The 1300+ photos and audio recordings were recovered from devotees' personal archives.

Access to the old domain (maharajji.com) was lost, so all content was placed on maharajji.love. The visible parts of the site have been polished up, however, the back-end functionality is very limited due to the fact that the site was recovered from the archive instead of being built and programmed properly.

Version 7: maharajji.love in October 2020 In July 2020, the Ashram pages received a makeover and Ashram Brindavon was added to the list. Currently Urvashi is recording the missing songs for the Practice section. Maharajji's Global Site continues to be updated, polished, corrected, formatted, adjusted, and added to, here and there, bit by bit... by Maharajji's Grace.
< Prev