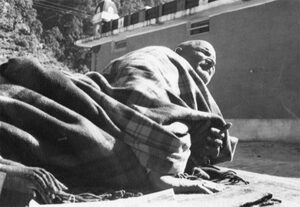 When Baba's moorti was consecrated at kainchi in the month of June 1976, Ram Dass (to me Baba ram Dass Aka Dr Richard Alpert) visited kainchi the same year in autumn month. He was introduced to me by Mr K K Sah, a great devotee of Baba and personal friend of Ram Dass. Ram Dass wanted my help towards getting one Hanuman moorti made from Taos temple. I agreed. He had a wonderful concept of the Hanuman statue. I accompanied Ram Dass entourage, consisting of Mr K K Sah, Chaitanya of the USA, from Vrindavan to Jaipur.

We reached Jaipur late in the evening and met the sculptor next morning. The concept of Flying Hanuman with Ram's Ring in his hand going to Sita with Ram's message was a brilliant one and a real turn on. We agreed on a token advance  and same was paid for a plaster of paris replica. We were supposed to be back at Jaipur in ten days to approve the sample moorti carved out in plaster of paris.

Next few days in Ram Dass' Company were spent in sharing with him the leelas of Baba and my experiences. Some of the experiences discussed in this book thus have also been narrated in 'Miracle of Love' by Ram Dass.

The second visit to Jaipur decided the price of Moorti and the finalization of the sample. I agreed to supervise and monitor further progress.

The moorti carving was started by selection of marble rock which came out excellent. The moorti started taking shape and I visited Jaipur at least twenty times. I would take photographs of the moorti and send them to Ram Dass for comments. He was very thorough and commented like a trained sculptor.

Over the time we agreed on feet, calf, thighs, waist, chest, hands and neck. The face still had not come to Ram Dass's satisfaction.

He kept on commenting on the face. I was also fed up and shot back a reply stating, now let Lord Hanuman decide how he would like to look. Ram Dass laughed since he wrote back saying, "I guess you are right."

I went to The Mother and requested her to visit Jaipur for a final finishing. She did that and stayed in Jaipur for four five days and gave valuable suggestions to the sculptor. Lord Hanuman that finally arrived at Taos is the most unique concept. It is the darling of Americans and probably be the only second flying Hanuman in the world. The first was at Rama's time.

Learn more about Taos Hanuman Temple in New Mexico USA.Buy this book at Amazon: I and My Father Are One: The Grand Unification