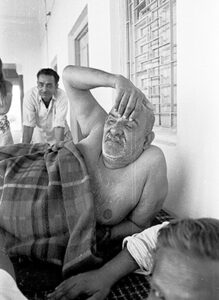 At around 5:00 PM, I went to the manager of the Ashram and asked for Prabhu Dayalji's* room. Only a few minutes ago, somebody had told me that the writer of Vinaya Chalisa and Pushpanjali had come for today's bhandara. I did not want to lose an opportunity and so rushed to him. He was sitting peacefully in his room, a sober looking bespectacled man in his early sixtees. When I asked him about what inspired him to write Vinaya Chalisa, he told his story:

Mr. Prabhu Dayal Sharma was a Cashier in ITI, Vrindavan in 1965. The story starts one fine day in the same year. Mr. Sharma was feeling uneasy and thought of going for a walk. He thought of going towards 'Lutere Hanumanji' (a famous temple of old-day Vrindavan). As he was passing the temple, he met a certain friend Mr. Jagdish Prasad Singhal. Mr. Singhal asked Mr. Sharma if he had met a saint called Neeb Karori Baba. When he said no, Mr. Sharma gave him the address of Haathi waale baba (who used to sit at the Gore Dauji temple just next to Maharajji's ashram). He said that Haathi waale baba would direct him to Maharajji.

Mr. Prabhu Dayal Sharma reached the ashram and was asked someone if he could see Neeb Karori Baba. He was told to wait. Just then Maharajji went around him and entered his room. But Mr. Sharma could not recognise him. He asked again if he could see Maharajji. This time the person said he would go inside and ask Maharajji. At that time, Mr. Sharma did not like that Maharajji was keeping him waiting. When he was ushered inside, Maharajji asked all sorts of questions: What is your name? What do you do? How much salary do you get?

After this Maharajji said to Mr. Prabhu Dayal Sharma: Jao!! (Go!!). Mr. Sharma said that please allow me to sit for some time. Maharajji scolded him and sent him outside. He went back home and was not very pleased with his first encounter with Neeb Karori Baba. But when he reached home, he felt a sharp electric shock and heard himself saying loudly, "Maharajji is a great man and not an ordinary person."

Two days later, he got the inspiration of writing 'Vinaya Chalisa' and he completed it within six months. He does not remember exactly how much time he took because he was in a mental asylum during this time. Once cured, Mr. Sharma sent his poem to Maharajji by post. On seeing the letter, Maharajji tore it into pieces. Some years later in 1969, when Mr. Prabhu Dayal Sharma went to Kainchi, he saw his poem being sung by many devotees. He also saw a man named Mr. Kali Kapoor distributing pamphlets of 'Vinaya Chalisa'. When asked Mr. Kapoor said that he had got the letter printed from the torn pages which he had found at Vrindavan Ashram!

NOTE: The present version of Vinaya Chalisa has two differences from the original form: A verse has been expanded and another has been added.