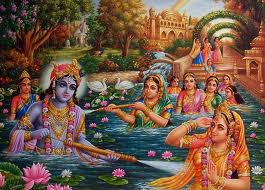 The festival of Holi is celebrated on the day after the full moon in early March every year.

Originally a festival to celebrate good harvests and fertility of the land, Holi is now a symbolic commemmoration of a legend from Hindu Mythology. The story centres around an arrogant king who resents his son Prahlada worshipping Lord Vishnu. He attempts to kill his son but fails each time. Finally, the king's sister Holika who is said to be immune to burning, sits with the boy in a huge fire. However, the prince Prahlada emerges unscathed, while his aunt burns to death. Holi commemorates this event from mythology, and huge bonfires are burnt on the eve of Holi as its symbolic representation.

This exuberant festival is also associated with the immortal love of Krishna and Radha, and hence, Holi is spread over 16 days in Vrindavan as well as Mathura - the two cities with which Lord Krishna shared a deep affiliation. Apart from the usual fun with coloured powder and water, Holi is marked by vibrant processions which are accompanied by folk songs, dances and a general sense of abandoned vitality.