LilasI and My Father are OneI Do Not Do Anything, God Does It 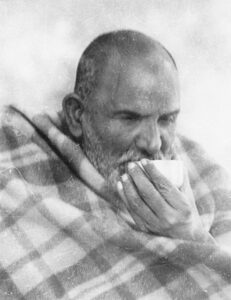 Whenever people thanked Baba for his act of grace, he would say, "I do not do anything, it is god who does it". Some one who was truly humble and egoless enough to say, "I do not do anything only Baba does" could only take up the hot seat and carry on the good work. Baba would often say that following the spiritual path was like "walking on a sword's edge" and such person had to face hardships, humiliation, and criticism and yet carry on with the mission of singing the Lord's glory.

In the summer of 1958, Baba initiated me at Allahabad and promised to continue the relationship. Same year. Ma along with her family came to Allahabad during winters, for a prolonged stay. The moment I met her, I became an instant son to her.

Whenever Baba came to Allahabad, I would drop my file at her place of stay and go to Baba. I would take message to and fro. From 1958 to 1972 although I had undergone strong transformation from brathood to adulthood to a householder (since 1970), I kept on meeting Ma at various occasions and developed extreme fondness for her. In June 1973, when I last met Baba ji, Ma gave me a bottle full of the Ganges water after washing Maharajji's feet with the same, with instructions that I should drink a spoonful of the same. As described earlier, those days I had bucketful of financial problems. When Baba left his body I fully geared up to take side with the Mother and support her with all my mind, body and soul.

I have been a lucky participant in both phases of Baba's form and formless play. The duality that disappeared with his pat on my head in the year 1958 gave me the understanding to fully enjoy and participate in the future game. It also gave me the strength and spiritual maturity to remain undeterred and focused when few devotees tried to undermine my faith.

Buy this book at Amazon: I and My Father Are One: The Grand Unification