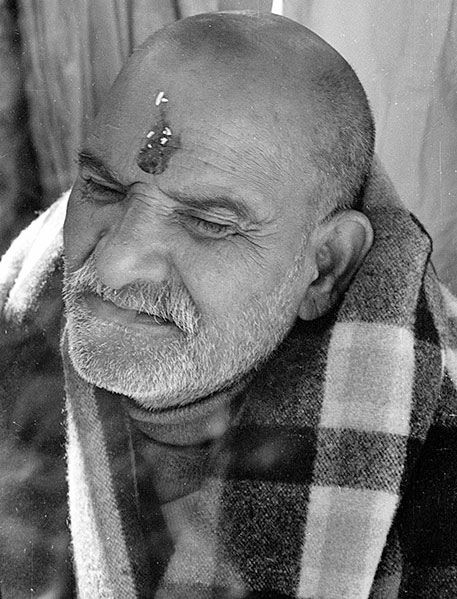 Shrimati Vidhya Sah used to come to Kainchi from Nainital to visit Maharaj.

One day, while she was sitting near him she thought that Baba did visit the houses of his devotees in Nainital. She wished that he would come to her house, but she hesitated to ask him.

Her house was in the main market and one had to climb a narrow staircase to reach it. Seeing Baba's physique, she thought that he would not be able to climb up those steps. Baba said, "I will come to your house. Get Havan performed."

She got the Havan [fire sacrifice] performed by the priest in the temple. The day the final oblation was offered to the God of Fire, she returned home after taking prasad. All the way, a sadhu followed her. She was slightly disturbed by this, yet she did not saying anything to the sadhu.

When she reached home she went in through a back door, passing through the house of a Punjabi family. The sadhu followed her but the Punjabi family scolded him and sent him away. She did not understand why the sadhu had followed her. Many months after this incident, while she was again sitting by Baba, she remembered that Baba had told her that he would visit her house one day.

She had got the Havan performed as he had requested, but he had not made the promised visit. Baba spoke at once, "I did follow you to your house until the Punjabi family scolded me and sent me away."

Seeing no similarity between Baba's words and that thin weak sadhu, she was surprised at Baba's words but did not disbelieve them. She felt full remorse that she did not welcome him because of her ignorance.