LilasChants of a LifetimeKD and the Fire in Baba’s Eyes 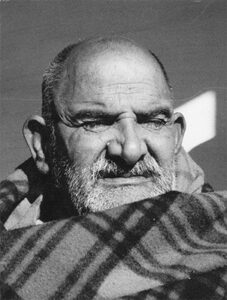 Once when we were in Allahabad at Dada's house, I was sitting with the other devotees, waiting for Maharajji. Thinking that he was in his room, I went out to wait on the porch. It was night, and as my eyes grew accustomed to the dim light, I saw that Maharajji was all alone, sitting in a chair and looking out into the night. I walked up to him but he didn't look at me, so I sat down in front of him. I took his leg to massage it and, surprised, his head whipped around to see who was there. His eyes were wide open and lit with the fire of the state he'd been before I interrupted him. There was no covering over them - nothing but pure, raw God - and for one second, his eyes burned into mine. I began to explode, but he instantly softened himself. Smiling at me, he siad, "Tik. It's okay." Then he told me to go.

Instead of going back into the house, I staggered back to the place the other devotees and I were staying in, which was a short walk from Dada's. I got into my sleeping bag, still feeling the effects of that look. One of my gurubhais was reading out loud for a holy book called the "Ashtavakra Gita" and, as I passed into sleep, the last words I heard were : "On the ocean of consciousness, the ship of the universe is blown about by the winds of desire. Let it come and go. You're not affected by it."

I immediately entered a dream in which it was a Tuesday, Hanuman's day. I'd gone down to the ocean, and strolling along the shore, i found the shore, I found a boat waiting for me. I stepped into it and sat down. I had great faith in the boatman and was completely at ease. Slowly he guided the boat through the rough waves out to the open sea. As we headed out to the horizon, I sat and watched the moon starting to rise. Its light spread ecstatically, diffusing all around. We threw laddus, hanuman's favorite sweets, into the ocean as an offering, and the gods accepted it. The moon never rose completely over the horizon, but its light spread in silver blue concentric circles in all directions. It was actually not light, but silvery rays of bliss that entered me, over and over again, every second. The bliss was so intense that I was a little afraid.  Something was holding me back from total absorbtion, yet it was the most powerful experience I had ever had. There seemed to be something left undone on this, the walking plane - some person or thing I wanted to hold on to, some desire, or something I wanted to know. I was very close to being able to surrender all of me, but not quite yet. I knew that the ship of my life was being totally guided. The feeling of being guided through the waves, of relaxing and letting go, was indescribable. All of this came from one millionth-of-a-second glimpse of Maharajji's Being.

He had hid himself from the other devotees and me because we simply were not able to bear the radiance of his true Being. Dada used to say that Maharajji had two blankets: a woolen one to cover his body and an inner one to cover his inner radiance. Maharajji knew exactly what we could take without disintegrating; he orchestrated everything perfectly, and continues to do so.

Buy this book at Amazon: Chants of a Lifetime: Searching for a Heart of Gold