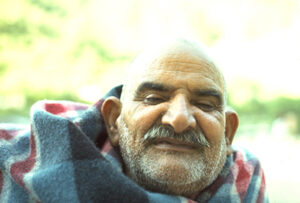 Every individual suffers from some kind of physical and mental pain. But with many, hunger and disease of body or mind become acute. One of Babaji's visible methods of helping people was by feeding the hungry, arranging medical treatment for the sick, and giving money and materials to the helpless. The brief interlude of his life in the ashrams was spent in caring for the hungry and curing the sick, like the head of a household busy with his large family. Those who visited his ashrams, especially Kainchi, saw how prasad was being served throughout the day to all and sundry without any discrimination. For some it was prasad, an auspicious token of spiritual elevation, but for many more it was a whole meal for the stomach.

Seeing that food was being given in such large amounts, some persons complained that the food was being wasted. Babaji was unrelenting and continued to ask us to give in plenty. "Give more, give more, Dada." No doubt Babaji would never allow food to be wasted or abused, but his idea of abuse and waste was different from ours, so the bhandara continued, giving food to the needy.Some persons have suggested that one of the reasons for his choice of Kainchi and Bhumiadhar for ashrams was to be in direct contact with the helpless—particularly the shilpakars, the forsaken ones. They fell easy victim to the allurements of the preachers [Christian missionaries] who approached them with loaves of white bread, biscuits, etc. After several bhandaras at Bhumiadhar, he said one day, "Dada, the preachers do not come anymore because they have seen that their 'double roti' (white bread) and biscuits cannot fight with your puri and halwa."

From: Saints and Devotees Chapter of The Near and The Dear.