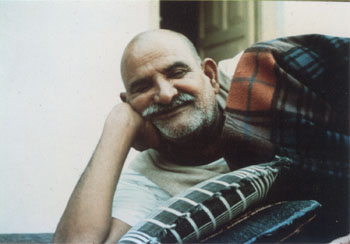 They did not take prasad at Kainchi Ashram because both mothers are only after having Maharaj ji's darshan. They decided to walk the twelve kilometres to Bhumiadhar in the darkness of night on that lonely deserted road. As they started on their way, a black dog appeared out of the darkness and accompanied them as if he was their for their protection. When they arrived at Bhumiadhar at midnight, Sri Ma thought of giving the dog some food. Almost in an instant the dog disappeared and could not be found anywhere.

Before Sri Ma and Sri Jiwanti Ma arrived, Maharaj ji had asked Brahmachari ji to prepare food for them. Brahmachari ji waited outside the temple to greet them, and as soon as they arrived, they had Maharaj ji's darshan. He praised them for their devout fervour and said, "When you have started on the path to God, proceed, do not stop. He will take care of you." He then asked them to go and have prasad.