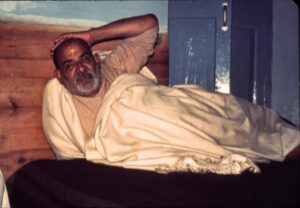 A few days after Maharajji's Mahasamadhi, a busload of foreign devotees descended upon Vrindavan. Accompanied by Ram Dass, they came from all over to attend the final bhandara of great feeding which was associated with the final rituals twelve days after death.

During this period there were discussions regarding the gathering of stories from Baba's Indian devotees for eventual inclusion in a book (Miracle of Love). Myself, Janaki and Chaitanya were offered the opportunity to serve as collectors of stories.

After the departure of these friends, the three of us stayed on in Kainchi for another month, enjoying the quiet of the ashram and the valley. We then began a slow pilgrimage across North India, visiting and staying with Baba's devotees.

The divide that had for so long separated the new and foreign devotees from the old Indian ones had vanished. We now shared a sense of common loss and common family. It was a magical journey into the hearts and memories of people who had been called to Maharajji years earlier. 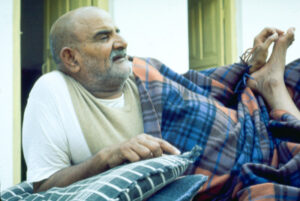 In 1957, I had my first darshan. It was in Bhowali. Maharajji was with a business man from Delhi. He went to the house of a principal and on the way back He stopped at my shop. I ran from the shop and Maharajji gave me a laddu.

The businessman did arati to Maharajji right there in the road. When he finished, Maharajji went away.

After that I saw Him again in 1960 at Bhumiadhar. Maharajji asked me to bring vegetables from Haldwani. then when GS asked me if I had made a commission I cried and went to Maharajji. Maharajji got upset with GS and said, "YOU SHOULD NOT SAY THINGS LIKE THAT." 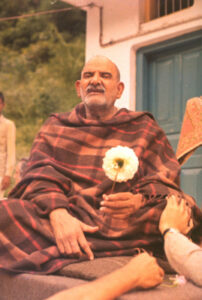 A certain pattern had evolved wherein Maharajji frequently called upon myself and a couple of other foreign men whenever he required some enforcers. Sometimes it was to deliver some bad news such as a Jao, other times just to get the group herded together for some purpose. It was not an enviable role, such as that enjoyed by a favorite singer or the one with the honored and coveted job of waving the towel to move the flies along.

But any way in which one was called to serve was a blessing, and we all wanted his attention.

One morning in Kainchi we were sitting around Baba ji on the verandah singing and laughing at his play. At some point every morning he would get up from the tucket and walk across to his office. This morning as he descended the three steps to the courtyard, with the whole group of us standing to accompany him, one young western man wrapped in a red shawl stumbled down the stairs and sprawled on the ground. He may have brushed against Baba, who turned around, saw him and continued to his office. 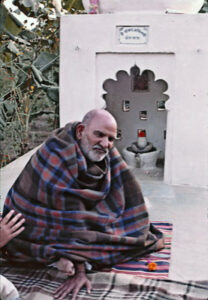 My awareness of who Maharajji was, who Maharajji is - distilled through all the dust and mirrors of my own perception - developed over time. During the many hours sitting at Maharajji's feet that September and October of 1971, he allowed me to glimpse a little of who he was.

Of course, everything was new to me, and my mind was neither overly inclined nor even able to do much analyzing of the situation.

From the first moment, Maharajji was extremely familiar with me. He seemed to know me inside and out. The relationship of guru and chela seemed to have been presumed from his side. Although much of his out manifestation was childlike, it was I who became to child. From my previous self- image as independent and self-sufficient, I was now eagerly awaiting his every word or sign of attention, as a child towards its mother.

I wanted and expected his guidance in each and every aspect of life. That transformation was more or less complete almost immediately. My whole being was in a state of bliss for those first few weeks, and there was no-one inside of me saying, "Hold a second. What's going on here ? Let's think about this before process any farther." 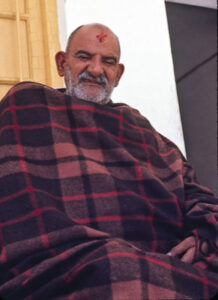 Years back I'd heard a tale of horror, which happened to a young French girl traveling through India. She'd been fascinated by Aghori sadhus, who have a reputation for being way out on the fringes of the sadhu world. She'd gone to Gujarat to seek them out and had come in contact with some black magic babas.

They drugged her with datura (Jimsom weed) which produces a long-lasting zombie-like state in its victims. She was kept drugged and used by the band of sadhus for sex and often left for hours in the blinding heat by the side of the road with a begging bowl and made to beg for rupees from passerby.