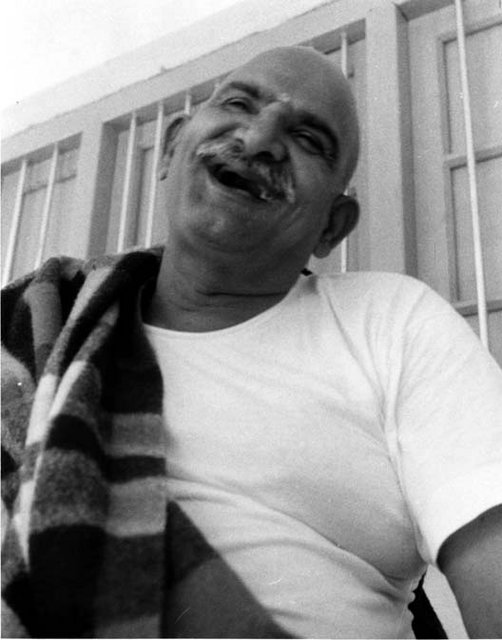 Nasir Ali was a retired Sub-Inspector of Police and a long-time devotee of Maharaj.

In 1963, he came to meet Baba at the home of Suraj Narain Malhotra in Lucknow. He was eighty-four years old then.

He wanted to narrate an important event in his life to Baba.

Baba, putting his finger to his lips, gestured to him to keep quiet.

Nasir Ali was so trouble, I would fast for the whole day.

Then I would take a bath and shut myself in my room.

Sitting on the floor in the darkness, I remembered Baba and he would come and sit beside me.

I would tell him my problem and he would give me a solution.

This event happened during the Second World War. Chandra Shekar Pande, S.D.O, M.E.S, was very worried about his wife. She had fever for a long time and was now so emaciated that she was close to death.

He sent a telegraph to his father-in law, Motiram who lived in Anupshahar. The elderly Motirarn was very disturbed at this news. He went to his Guru, Mauni baba, who was a highly elevated holy man of the time, and asked him, "0 Gurudev, today I beg of you, please, somehow or the other, restore life to my daughter, or end my life also. " Mauni baba remained in a meditative pose for some time and then said, "Only Baba Neeb Karori is capable of restoring life. You pray to him to fulfill your wish."

So, at Anupshahar, Motiram. meditated on Baba and prayed to him.

This event happened in 1951, in Haldwani. The young wife of Pooran Chandra Joshi, an employee of the Forest Dept., UP, had an attack of paralysis. Her face was distorted and her complexion became pale. Her eyesight became blurred.

Leaving her in this pitiable condition her husband had to go out of station.

On his return, her condition worsened. Joshi consulted a doctor who advised him to take her to Lucknow or any other big town, to get her treated.

This treatment would be expensive and was beyond Joshi's means.

They remembered Maharaj in a state of helplessness and then both of them fell asleep.

Baba gave them darshan in a dream and her condition then improved.

Some days later Baba himself came to their house and asked her, "Daughter-in-law, what happened to you?"

In 1981-82, Nandlalji, a ghee merchant from Haldwani, suffered from an incurable disease.

Although he had undergone treatment in Haldwani, there was no improvement and he had to go to Delhi. There, many treatments were tried, but his condition remained the same.

The doctors were not able to find the cause of the disease. All kinds of tests were undertaken, even his spinal fluid was tested. If anyone suggested a medicine to him, he tried it. His wife was also sad because of his ill health.

One day, worrying about this problem, she was at home alone, crying. She meditated on Baba and had vision of Baba standing by the Hanumanji's murti in Vrindavan. Raising his index finger, he was saying to Hanumanji, "Will  you cure Nandlal or not?"

She was filled with happiness by that momentary glimpse of Baba and became confident that her husband would recover.From that very moment, a miraculous change started taking place in Nandlal ji's condition.