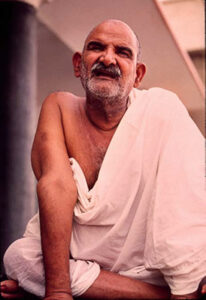 There were many such experiences indicating how Babaji kept track of the doings of his devotees. In 1947 at the crown of Ayodhya Nath Singh's glory, as an honest and incorruptible officer who resisted all temptation to make easy money while performing his duties, he was posted in Faizabad as Excise Inspector. He received a telegram from Babaji asking him to meet him in Allahabad.

When he reached Allahabad the next morning, he found Babaji sitting with several devotees in a room by the side of a lane. He stood there in the lane looking at Babaji, thinking that he might call him. But Babaji kept him waiting, then went to another room inside the house. Ayodhya Nath felt highly agitated at the treatment meted out to him. Babaji had sent for him; he had come for that only. How could Babaji refuse to give him darshan?

He was very upset and was thinking of going away, when someone came and told him that Babaji wanted him in his room. When he reached the room, Babaji was talking to the people there. Then he said, raising his voice high, "You have become atheist? You have become atheist? You have left God? You will most certainly be made Assistant Commissioner. Do you think the law made by God can be overturned?"

Hearing Baba shouting like that, everyone in the house rushed to his room to find out what it was all about. Only Ayodhya Nath understood. He understood much more than what was spoken out loud by Baba. He became dumb and stood gazing at him, avoiding everyone's questions. The state of suspense continued for some time, then he was sent home with a devotee for his bath and food. Baba told the devotee that after taking some rest, Ayodhya Nath should go to the station and return to Faizabad that very afternoon. The parting message was, "Jao. Sab thik ho jayega. (Go. Everything will be okay.) You should never lose faith in God."

As Babaji had foretold, Ayodhya Nath indeed returned to Allahabad a few weeks after that to take up his new post as Assistant Excise Commissioner. The post should have come to him long before as his rightful due, but corruption and extraneous pressures barred his right. It was only when Babaji cast his glance on his woes that the path was cleared for him.Years later Ayodhya Nath narrated to us the full story behind his promotion in 1947. At the time Babaji had sent for him in Allahabad, he was very sad that his long overdue promotion had been denied again, although there was nothing in his service career to disqualify him. This he took to be due to the heedlessness of God, and he lost his faith. He was a religious person and a devotee of Krishna. He blamed Krishna for his misfortune and took down the picture of Krishna hanging on the wall, turning it face down. Babaji's telegram came at that time. Little could he imagine that some unseen hand was going to set right the picture he had turned upside down. Heckling him as he did, Babaji was referring to what he had done to the picture in his house in Faizabad.

When he returned to Faizabad that day, as Babaji had asked him to do, his mind was divided in two. Even though Babaji had given him assurance, the odds were strong that there was not much hope for him. He was resting in his room one day when someone shouted, "Hazur, I come with very happy news, and I should get some reward for this." It was an orderly from the District Magistrate office with a copy of the message sent by the Government Secretary saying, "Ayodhya Nath should proceed immediately to Allahabad to take charge as Assistant Excise Commissioner. Before proceeding, he should hand over his charge of office to the District Magistrate."

"This was good news—the very good news for which I had pined for so long. But it was not an unmixed joy—there was also a feeling of pain, a repentance that brought tears to my eyes. How fragile is our faith in Babaji, who has nothing but love and mercy on us."

Continuing his explanation, Ayodhya Nath recounted that Shri Gobind Ballabh Pant, the Chief Minister of Uttar Pradesh in 1947, had told the Excise Commissioner that he was tired of hearing complaints of bribery and corruption against his department. "People come and complain that nothing gets done without paying some money to the officers in charge of that work. They talk of bribery and corruption being rampant. This must be stopped without any delay." Mentioning the names of two Asistant Commissioners accused by people, he said, "Take away the work under them and give them some honest officer." When the Commissioner said that there was no other Assistant Commissioner to whom the work could be given, Pantji said, "There may not be someone in that rank, but there must be an honest man in your department." The Excise Commissioner replied, "There is one, but he is junior and not selected for that post." Pantji burst out, "I do not want to hear whether he is junior or senior, selected or not. I want an honest officer for the post. Create a post for him, appoint him to it, and then hand over the charge of the work now being done by the others."

This was a secret known only by the Chief Minister and the Commissioner, and Ayodhya Nath came to know of it much afterwards. He used to say that many persons admire him, saying his appointment was a tribute to his honesty, but he takes it as something different and very precious—vindication of God's mercy and the sanctity of his rule. "I had lost my faith in God, and my gracious guru recovered it for me."

From: Ram Narayan Sinha Chapter of The Near and The Dear.